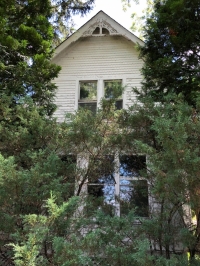 A bit of the home's "gingerbread trim" peeks out from behind overgrown vegetation. Photo by Will Krause

Part one of a four-part series on the Limpert family and their bygone fruit farm on Detroit Road in Westlake.

A mere $2.3 million will buy you 8.6 acres, twin circa-1893 Eastlake style homes and a unique piece of Dover history. The property is located just west of St. Paul Lutheran Church on the south side of the street, 28083-28119 Detroit Road. The white frame homes are set back a fair distance from the road and are almost obscured by overgrown vegetation. When they were still clearly visible from the road the “gingerbread” trim was a pleasant sight to see.

An Ohio Historic Inventory form says that a sign advertising “Wine for sale” was still displayed in 1977. As recently as the 1990s I believe a red and white “Bonded Winery” sign was mounted on the side of the road. Was it once illuminated with neon? Did it also say “Limpert’s Fruit Farm”? I can’t remember for sure.

The Limpert vineyards are memorialized in the name of a short street in the adjacent Settler’s Reserve subdivision called “Limpert’s Vine Row.” The overgrown rows of grapevines, orchards and crop land are still visible in aerial photographs on Google and to some extent from the ends of “Hall's Carriage Path” and “Taylors Mill Turn” cul-de-sacs and the easterly adjacent St. Paul Lutheran parking lot. St. Paul’s actually owns the land immediately north of those cul-de-sacs for several hundred feet.

The 8.6 acres is all that remains of a 60 acre farm owned by Minnie Limpert in 1927 which stretched all the way south to Hilliard Boulevard and beyond. An 1874 map shows a J. Limpert owning 45 of these same acres, though the earliest deed for them I could find was filed in 1880, transferring 13 acres of land from Phinney and Osborn to John Limpert. This land transferred from John Limpert to his son Charles W. Limpert in 1914 and in 1915 to Charles' wife, Minnie, upon Charles' death.

In 1956 the land transferred from Minnie to her unmarried daughter, Julia M. Limpert, on deeds notarized by Carl M. Limpert, her brother, a Justice of the Peace of Westlake Village. In 1959 Julia gave 1/3 interest in all of the properties to Carl M. and Herbert Limpert, her two unmarried brothers. Herbert died in 1974 and Carl M. inherited the land in 1982 after Julia died in 1981. In 1982, at age 74, Carl M. married the 69-year-old Amelia Cordt Grimes; she died in 1985.

A resident of Settler’s Reserve, Jacqueline Bonitati, is passionate about trying to save this remnant of Dover’s agricultural past. She is canvassing her neighbors and reaching out to the owner and the city to see if there is a way to save at least some of the land from development. Since the property is zoned single family it could be developed as a subdivision but that is exactly what Jacqueline is hoping to avoid. She envisions bringing the land back into some kind of agricultural use which could also be permitted under single family zoning.

Unfortunately Jacqueline says Settler’s Reserve does not have a Homeowners Association, which would be one mechanism that could be used to acquire and hold the land. Unless someone comes forward with a couple million dollars, probably the best hope for her dreams is that the land be rezoned for single family cluster in partnership with a developer who would build new cluster units on some of the land and save the rest of the land for joint agricultural use for the unique cluster home buyers who would be interested in this kind of thing. As she says, vineyards and wine are in vogue these days.

A flyer that Jacqueline e-mailed to me titled “Save the Vineyard” states that she wants the community to consider historic preservation options and cultural resource protection, tax incentives to not develop this land as housing, or the city or a private party to turn it into a functioning vineyard again like the John Christ Winery in Avon Lake.