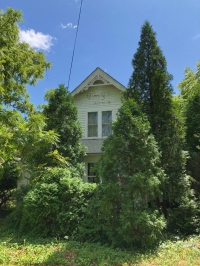 Gable end of circa 1893, Empire-style Limpert home at 28083 Detroit Road. Photo by Will Krause

Part two of a four-part series on the Limpert family and their bygone fruit farm on Detroit Road in Westlake. The property is up for sale.

I first became aware of the Limpert property during the 1990s when inspecting some new construction at St. Paul’s church and school next door. The property looked like a farming time capsule with “ancient” abandoned farming equipment scattered around the property. The last owner named Limpert, Carl, died in 1998 and the current owner inherited the property through probate court in 2000. Residents of Settler’s Reserve subdivision say the vineyards have not been tended for at least 15 years and it is probably more likely the 21 years since Carl Limpert died.

The book “You’ve Come a Long Way Westlake…” states that around 1900 Dover was the second largest grape producer in the United States and in 1930 had over 1,200 acres of fields devoted to vineyards. In those days Dover wines were prized and Limpert’s Winery had a wine press used to press grapes to extract the grape juice.

The book goes on to say: “Grape farmers of Dover, Avon and Vermilion formed a Grape Co-op in the early ‘Thirties, holding regular meetings throughout the years until about 1960. The crops continued to be picked by hand, usually by women. There were still twelve grape growers in town in 1960, with the Dover Vineyards and Limpert’s Fruit Farm having the major wineries in town. In the 1950’s, grape farmers of the region bought the Welsh Grape Juice Company. In 1970 a grape-picking machine was purchased for $27,000 by Westlake grape farmer Leonard Albers and a few other grape farmers. The huge machine straddled the rows of vines, literally knocking the grapes from two rows of vines at a pass. The grapes were guided by endless conveyor belts into one of several large wooden tubs following in an adjacent row on a flatbed trailer, towed by a tractor. Albers continued tending to the vineyards in the winter, and harvesting grapes in the fall, until the early ‘Eighties, on land that is now the western portion of the Settler’s Landing development, just north of Bassett Elementary School.”

It is easy to romanticize about the charm and simplicity of the good old days but farming was and is hard work. Like everything else, farming and farming practices evolved over time and there are economic reasons why these last eight acres of the Limpert farm are sitting idle and why most farms in the region are now out beyond the suburbs. The county appraiser values the land at just over $500,000 which averages just under $60,000 per acre. The taxes per year are just under $10,000.

The selling price of the land will probably be somewhere between the appraised value and the $2.3 million asking price. Based on the appraised value the land cost is about $30,000 per potential single family lot. The asking price comes to about $135,000 per potential single family lot. A developer would need to install streets and utilities which would add to their costs.

Another trend besides wine and vineyards that is “in vogue,” mentioned in part one of this series, is CSA which stands for “Community Supported Agriculture.” As per Wikipedia it is a system that connects the producer and consumer within the food system more closely by allowing the consumer to subscribe to the harvest of a certain farm or group of farms.

Community Supported Agriculture consists of a community of individuals who pledge support to a farm operation so that the farmland becomes, either legally or spiritually, the community's farm, with the growers and consumers providing mutual support and sharing the risks and benefits of food production. The CSA offers consumers regular (usually weekly) deliveries of locally grown farm products during one or more harvest season(s) on a subscription or membership basis.

A CSA is just one of the ideas that I have discussed with Settler’s Reserve resident Jacqueline Bonitati, who wants the community to consider historic preservation options and cultural resource protection, tax incentives to not develop this land as housing, or the city or a private party to turn it into a functioning vineyard again like the John Christ Winery in Avon Lake.

Dover wines can still be purchased through Firelands Winery in Sandusky, Ohio.