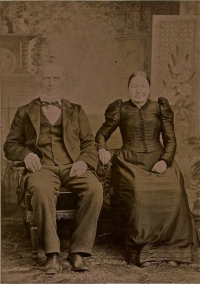 Photograph of Valentine and Barbara Limpert from a public member family tree on Ancestry.com.

Part three of a four-part series on the Limpert family and their bygone fruit farm on Detroit Road in Westlake. The property is up for sale.

Claire Gebben, an author and native of the Cleveland area whose German ancestor came to Cleveland in 1857 to become an apprentice blacksmith in his uncle’s carriage works, has written several books about her German relatives in Cleveland. The first is a historical novel titled “The Last of the Blacksmiths” and the second a memoir, “How We Survive Here: Families Across Time.”

Interesting things I have learned or have had re-iterated to me from her books about German immigration to Cleveland include:

These details have all helped in better understanding the saga of the Limpert family, whose former farm and homestead on Detroit Road are up for sale.

In her blog, Gebben mentions that the Western Reserve Historical Society has in their collection a child’s goat wagon from 1870 built by her great-great-grandfather’s Cleveland wagon company, that has recently been restored. The Westlake Historical Society has a nearly identical hand-crafted wagon, in excellent condition, donated by descendants of the Ehle family, another German-American family of Dover, that was recently on display at the Lilly Weston house.

The first Limpert to appear in an online search of Cuyahoga County property deeds and tax records is Valentine Limpert (sometimes listed as “Limpart”). He was born in Prussia in 1825. He shows up as early as 1853 as a land owner in East Cleveland and married Barbara Wehner that same year. In 1861 he owns and in 1863 is selling land in Parma Township and in 1869 purchasing 11 acres in Dover Township. The 11 acres he purchased on the east side of Dover Center Road, south of today’s Rose Road, stayed in the Limpert family for 127 years until they were sold by Carl M. Limpert in 1996 to construct the Courtland Meadows subdivision and adjacent retention basin.

Valentine Limpert sold this same 11 acres to Melchior Limpert (probably his brother or half-brother) in 1874 and moved south in Dover Township to a section of Dover that eventually split off to become part of North Olmsted. It is my understanding that Valentine is the ancestor of the North Olmsted branch of the Limpert family. Melchior is the ancestor of the Westlake branch. They are both buried with their wives at St. Paul Lutheran cemetery.

Melchior had emigrated to the U.S. with his wife, Eva, 14-year-old son, Friedrich, and 5-year-old son, Johannes, in 1850 with the intended destination of Albani (sic), New York, listed on the ship’s manifest. In 1856 he shows up on the tax records of Parma Township along with Valentine. In 1859 Melchior became a U.S. citizen. In 1859 to 1863 he appears on the tax records of Dover Township, from 1864 to 1869 the tax records of Warrensville Township. He died in 1881 without a will and his son John (Johannes) is named the executor of his estate.

It is this John who inherited all of Melchior’s land and first purchased what became the Limpert Fruit Farm sometime before 1874.