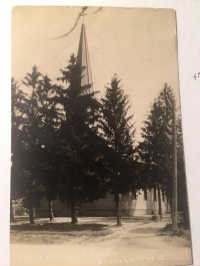 Part four of a four-part series on the Limpert family and their bygone fruit farm on Detroit Road in Westlake. The property is up for sale.

At one time the Westlake Historical Society maintained tan colored loose-leaf binders of information, much of which was incorporated in the book “You’ve Come a Long Way Westlake...” by William Robishaw. One article that didn’t make it into the book is a long letter written by Fern Standen Crehan to Mae Weston, dated Feb. 5, 1969. In this letter the elderly Mrs. Crehan reminisces about her childhood years growing up on her grandfather George Standen’s farm. The Standen farmhouse was located where Earth To You is located now (26690 Detroit Road).

Fern describes in detail her neighbors from New England and those of direct English and German descent who occupied the farms along Detroit Road in the 1890s and early 1900s. She states that between Bradley Road and east past Clague Road grape vineyards lined most of both sides of the Detroit Road – or as they knew it, North Ridge Road. She said there were also patches of berries, orchards of plum, pear and apple, but vineyards took up most of the landscape.

Fern states that a bit east of Clague Road began to appear more vegetable gardens, especially as one neared Rocky River, because the soil was rich and black. Farther to the west, through Avon and French Creek, more market gardening predominated; melons, tomatoes, sweet corn and the like were raised there. The Limpert Fruit Farm was in the heart of this grape-growing stretch of Detroit Road. Grapes produce on less than ideal soil.

Most of the farmhouses and barns from this era on Detroit Road described by Fern Standen Crehan are now gone but one notable one that remains is the former Yankee Mitchell barn at 26050 Detroit Road, across Detroit from Jefferson Square. It was converted into an attractive two-family home in about 1930. Its gambrel roof is an indicator of its earlier life as a barn.

The area around Cahoon and Detroit roads was identified as North Dover on a map of 1892 by George Cram. John Limpert’s property is shown as having only one home on that map. This is one piece of evidence pointing to a construction date of 1893 for one of the twin Eastlake style homes still standing on the Limpert property. The tax records support this conclusion with an increase of value in 1892 and 1894 suggesting that one of the two homes was completed in 1891 and the other in 1893.

It is unusual for two homes to be constructed on the same parcel, also suggesting that they were built for and occupied perhaps by two successive generations of Limperts? Probably the parents John and Maria in one home and Charles M. and Minnie in the other, since both John and Charles had large fields adjacent to the parcel with the homes constructed on them.

These fields all became part of the Limpert Fruit Farm with the death of both parents and Charles by 1915 when the land all passed to Charles' wife, Minnie Limpert. She also inherited or purchased the original 11-acre Limpert parcel near Rose and Dover Center Road which was still occupied by Valentine Limpert in 1892. Minnie was the mother of siblings Herbert, Julia and Carl. It was Carl who willed some of the Detroit Road land to St. Paul Lutheran Church and passed the rest of the land to the current owner who has put it up for sale.

It seems like the growth in Dover, of both St. Paul Lutheran Church, and the Limpert family, are intertwined like a grapevine. Both established themselves in Dover in the 1850s. Based on information about St. Paul Lutheran Church in “You’ve Come a Long Way Westlake…”, the church, is an offshoot of the Evangelical Lutheran Trinity Church of Cleveland’s Ohio City neighborhood.

In the 1860s and 1870s both the church and the Limperts established themselves on the south side of Detroit Road next to each other and built their initial structures. In 1877 the congregation built a more substantial church building and in the early 1890s the Limperts constructed the current twin homes.

An interesting story reminiscent of today’s extreme weather is recounted in “You’ve Come a Long Way Westlake…” in the section about St. Paul Lutheran Church: “On July 11, 1874, a severe hailstorm swept through Dover, nearly destroying all of the crops of the congregation. The storm also severely damaged fruit trees of the community, and grape vines to the extent that they were non-productive for several years. The whims of nature thus set back the building of a new church building. However, early in 1877 the congregation met the challenge of building a new church home; the new building to be sixty feet long, thirty-four feet wide, with a seventy-eight foot high steeple. In that year of 1877, the congregation numbered four hundred.”

A new church building in 1974 replaced the 1877 structure. It was most likely at that time, when the new school buildings expanded eastward, that a home, probably at one time the parsonage, with an address of 27951 Detroit Road, was moved behind another home at 27909 Detroit Road. To confuse the historical record, an Ohio Historic Inventory form and picture and description of 28083 or 28119 Detroit Road was mistakenly given the 27951 Detroit Road address in 1977.

This series of articles have demonstrated that the Limperts, St. Paul Lutheran Church, German immigrants and grapes have been an integral part of the Dover and Westlake community for 160 years.