Tracing the history of the Lora A. and Russell A. Pease home 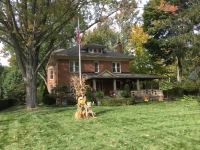 Dover Center Road house, circa 1923, was one of first built as Westlake transitioned from farmland to suburb

Most of the nearly 200 century homes in Westlake are vernacular farmhouses rather than “high style.” That is, they were built to be functional domestic dwellings rather than making an architectural statement or appearing monumental.

The exception are some of the homes along the section of Dover Center Road between Hilliard Boulevard and Center Ridge Road which include  a cluster of existing “high style” early homes in Westlake which were designed to make an architectural statement and appear monumental. This area is a prime candidate for a local historic district designation one day. One of enigmatic jewels of this stretch of road is a substantial brick home on the northwest corner of Dover Center Road and Seneca Drive.

This home was listed as the “Sarah Champ Residence” on the Ohio Historic Inventory in 1977 by Mike Adams working for the Western Reserve Historical Society, and estimated to have been constructed circa 1900. This does not appear to be correct because the property the home is on transferred out of the Champ family in 1919 and the house does not appear on plat books dated 1914 or 1920.

A deed for 2.88 acres of land west of the subject parcel transferred from Clara E. Lyons (formerly Clara E. Champ) to Clifford Pease in 1911 included the right to use a 30-foot-wide strip of land from his property to Dover Center Road to be known as “Champ Road.” Champ Road was subsequently known as Johnson Court until 1956 when property owners along it petitioned the Village of Westlake to change the name to Seneca Drive, as it is known today.

The Ohio Historic Inventory form includes this description of the home: “This house bears a kinship to the Tuscan Villa style. It is square and has a hipped roof with deep eaves. The facades are each 3 bays wide. The bay to the left of the door contains a double-hung window with a lintel surmounted by 3 semi-circular pateras. The central oak door is flanked by leaded sidelights. The side elevations contain central 2-story bay windows. The porch roof is supported by roughly textured Tuscan columns with an entry accented by a pediment. The service entry has been enclosed with plate glass. Built on the homestead of an early settler family, the Champs, this house was the first subdivision of that farm. The Dover Center subdivision was one of the early residential developments that was to transform this rural farm community into a suburb.”

Joseph J. Johnson appears to have been a house builder. He may have constructed a similar, but plainer, “American Foursquare” style home in Shaker Heights in 1918, and sold it in 1919. The term “Foursquare” was coined for this type of square or rectangular home with unbroken two-story sides of similar dimensions, and a hipped roof with dormers on each elevation of the house, and a large front porch. This house style was popular from the mid-1890s to the late 1930s. It was a reaction to the ornate and mass-produced elements of the Victorian and other Revival styles. This house style incorporates elements of the Prairie School and the Craftsman styles.

Besides the massing of the Dover Center Road house, its deep eaves and large porch, the craftsmanship of the stone trim and columns further cements its categorization as a Foursquare. The inclusion of the two-story bay windows on the side and the unique style of the stone porch railings and column and “semi-circular pateras” over the front window make it a one-of-a-kind Foursquare. In architecture terminology, a “patera” is a circular ornament, resembling a dish, often worked in relief on friezes, etc.

The current owners have added a storm door with Arts and Crafts stylistic elements which match the original leaded glass windows on each side of the door. They have also stripped layers of paint to restore the original color scheme of the exterior.

One County Auditor record indicates the year built for the home as 1920. However, the property appears to have transferred from J.J. Johnson to Blanche Johnson (his wife) and from Blanche Johnson to J.J. Johnson in 1921 with no mortgage on it. In 1923 the land was valued at $1,010 and the buildings on it were worth $1,000. In 1924 the land was valued at $4,120 and the building at $8,450. The property was deeded to Lora A. Pease with an $8,500 mortgage on it from Joseph J. Johnson on 10/24/1922; this indicates that the home was probably constructed in 1922 or at least partially constructed in 1922 and completed in 1923 because property taxes are always paid in arrears. This would explain why the tax value did not go up until 1924.

It is unclear if the street was known as Johnson Court because of the name of the builder of this house who perhaps planned on building other homes on the street or if it is named for Leverett Johnson, the first settler of the southern part of Dover Township that later became Westlake. As late as 1930 the street was still known as Champ Road on an easement granted by Lora A. Pease to widen Champ Road by five feet with a stipulation that a favorite maple tree be spared.