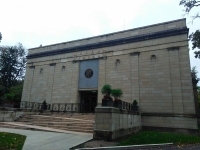 November’s Magical History Tour takes us an hour and fifteen minutes west on I-90 to Fremont’s Spiegel Grove, home of 19th President Rutherford B. Hayes. Magical History Hint: Bring your walking shoes, you’ll be glad you did!

A cool, leafy oasis rests amid the city of Fremont: Spiegel Grove beckons potential visitors with the promise of winding paths and welcome surprises throughout its verdant grounds. Once home to President Rutherford B. Hayes, the 25-acre estate now houses the Rutherford B. Hayes Library & Museums, which include a presidential library; museum; 31-room Victorian mansion belonging to Hayes and his wife, Lucy; the couples’ tomb; and a mile of paved trails.

Shortly after Hayes’ death in 1893, his second son, Colonel Webb C. Hayes, started planning a museum and a library to serve as a memorial to his father. The original Hayes Memorial opened on Memorial Day (May 30) 1916. It was expanded upon several times, the latest renovation occurring for its centennial in 2016. With nearly 25,000 artifacts to choose from, the museum is an impressive testament to not only the presidency of Hayes, who served a self-imposed one term, but also upon his life before and after.

Touring the museum begins with the Hayes presidency, set during the contentious campaign and election of 1876. Mired in an economic depression and tainted by the scandalous Grant administration, the floundering Republican party nominated Ohio governor Rutherford B. Hayes. The exhibit pays close attention to the electoral process, providing details on the customs of nineteenth-century presidential campaigning, who had the right to vote in 1876 (not to be confused with who actually COULD vote), and the Disputed Election of 1876 itself, of which Hayes emerged the victor. With 185 electoral votes, Hayes won the presidency by merely one vote. He was sworn in secretly on March 3, 1877, in the Red Room of the White House.

The remainder of the first floor showcases the Hayes family’s four years in the White House, including official policies and challenges of the Hayes administration, personal effects like clothing and china, daily life, and the post-presidency years.

Moving on to the lower second floor, visitors learn about Rutherford and Lucy’s life before the presidency, covering early years, service in the Civil War, and terms in Congress and as governor. The history of Fremont, Weapons Room, and two rotating exhibit areas finish off the museum experience.

While the museum is self-guided, touring the Hayes Home requires a guide. I was with the delightful Kent and his Tabasco sauce tie, a former teacher whose enthusiasm is matched by his knowledge, and who peppers interesting trivia throughout his tour.

Originally owned by Hayes’ wealthy bachelor uncle, Sardis Birchard, Rutherford inherited Spiegel Grove upon Birchard’s death in 1874. Over the next 20 years, the two-story summer home built by the uncle was expanded on and remodeled by his nephew, becoming the 31-room mansion we see today.

The home was lived in by Hayes’ descendants until 1965; they left all of the original furnishings belonging to Rutherford and Lucy. This made the 2011 restoration of six rooms on the first floor that much easier, especially when aided by the photographs Rutherford had a relative take of the rooms as he had them, which Kent hypothesized was for the benefit of future generations, should they attempt a replication. Blown-up images of the photographs are placed in each room for comparison, and comparisons are quite striking.

Highlights on the first floor include a portrait of George Washington that Hayes purchased during his term to hang in the White House; an elk antler chair made by mountain man Seth Kinman, gifted by him to President Hayes; and a most impressive surprise that I won’t give away, but it has to do with the staircase.

The tour continues on the second floor of the Hayes House, where the rooms are as they were when the last of the family left in 1965. Here is seen the influence of Webb, who turned several of the bedrooms into bathrooms and dressing rooms, and who may have been the originator for placing names for the rooms on their respective doors. His portrait hangs in the hallway, along with that of his wife, Mary, and other later members of the Hayes family.

Upon leaving the house, a visit to the burial site of President and Mrs. Hayes is only a short walk away; the tree-covered area was a favorite of the pair. Webb’s grave is next to that of his parents.

One can then choose to follow the serpentine trail from the tomb, around the house and back to the museum, or one can follow its windings beyond into the wooded acreage of Spiegel Grove. The word Spiegel is German for mirror; the estate was named such by Sardis Birchard, who was reminded of the German fairy tales of his childhood by the large pools of rainwater that collected under the trees.

It is not hard to imagine former President Hayes strolling through the groves, reflecting on his time at the White House as glints of sunlight reflected off the water, while simultaneously planning his and his family’s future. Spiegel Grove was central to Hayes’ later years; now we too can walk the paths under the trees, thinking about life and time gone by while looking forward to what lies just around the bend.