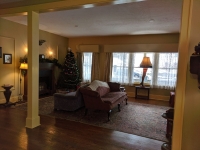 The Parkers' living room, decorated for Christmas. In the window, the lamp blazes forth in unparalleled glory. Photo by Rachel Polaniec

“Oh my goodness, there it is!” Those six words must be uttered by anyone at all familiar with that classic holiday flick, “A Christmas Story,” as they turn from Clark Avenue onto Tremont’s West 11th Street and behold the yellow-with-green-trim home of Ralphie Parker, his little brother Randy, his Mom, and his Old Man.

Based on Jean Shepherd’s stories about growing up in the 1940s, “A Christmas Story” was brought to life by Bob Clark in 1983. Out of some 20 Rust Belt cities scouted for filming locations, Cleveland was ultimately selected, primarily due to the cooperation of Public Square-located Higbee’s Department Store (now the Jack Casino), which included keeping its Christmas decorations up through January and allowing construction of a 30-foot-high Santa Mountain.

While the exact story about how the house itself came to be selected as the Parker residence is unclear, the version presented on the tour involves members of the scouting crew wanting smokestacks to be visible from the Parkers' backyard. Spying plumes of smoke in the distance, the scouts hopped in a cab, instructing the driver to head toward the source. Of course, they ended up getting lost, but just so happened to turn onto West 11th Street and the rest, as they say, is history.

After filming wrapped, the owner of the home took his tidy payment of $20,000 and promptly began renovating the exterior of the house in an effort to avoid any publicity. The following years saw ownership changes and additional renovations until 2004, when the house went up for sale on eBay for $99,000. It would be purchased by a man who lived in California, and who couldn’t find Cleveland, Ohio, on a map. Despite this minor detail, when the sellers accepted Brian Jones’ offer of $150,000, he knew he had something special.

Growing up with “A Christmas Story” as part of his family’s Christmas traditions, Jones began making and selling replicas of the famous Leg Lamp in 2002. By 2003, his lamps had reached 2,000 online sales. Bolstered by this success and confident in the film’s popular appeal, Jones went about transforming the dilapidated old duplex on eBay into the warm family home on the big screen. Demolition began on Jan. 30, 2006: The interior was stripped down to the studs and completely rebuilt, a new double-landing staircase was installed, and the contractor – armed with 12 pages of film stills of the home’s interior – went about replicating each room to be as close to the original as possible. Additionally, the exterior was stripped of its many updates and returned to its former state.

Ten months and $240,000 later, A Christmas Story House opened on Thanksgiving weekend, with an estimated 4,300 fans touring the home. And oh, such a tour!

We began in the gift shop, from which the engaging and genuinely funny Ernie took the group across the street to the house, up the front stairs onto the porch and in through the front door. The excited gasps, oohs and aahs began immediately, and would continue for the tour’s duration. While some of the filming did take place on a soundstage in Canada (astute visitors will spot the slightly different layout), entering the house really is like stepping into the movie itself.

Once inside, Ernie gave a little spiel about the house’s history as a filming location and conversion into the museum we see today, then gave us the go ahead to “run wild” for the next 15 minutes. As everything is a reproduction, we were free to sit on the sofa, crawl into the cupboard under the kitchen sink, hop in the large wooden crate labeled “Fragile,” and even handle the “Major Award” gleaming in the window. Upstairs, we browsed through the toys and collections in Ralphie and Randy’s bedroom, decoded Little Orphan Annie’s message in the bathroom, and admired the articles in Mrs. Parker’s sewing room (the only part of the house that is roped off, being host to actual objects from the 1940s).

After our 15 minutes of fun, Ernie led everyone through the kitchen and out onto the back porch where Ralphie almost shot his eye out. From there we could take in the Parkers' back yard, including the original shed where Black Bart’s men were defeated by Old Blue. Heading back across the street, we finished our tour in the museum. Here the objects are original, and as such are displayed behind glass in typical museum fashion. Highlights include Randy’s snowsuit, toys from the Higbee’s display window, and the blackboard with "A+++" written by actress Tedde Moore (as teacher Miss Shields).

The museum’s self-described holy grail is an “official Red Ryder, carbine action, 200-shot, range model air rifle with a compass in the stock and this thing that tells time [a sundial],” one of six custom guns made by Daisy for the movie. Of the six, one is in the film archives, one belongs to actor Peter Billingsly (as Ralphie Parker), and the third went on display at the A Christmas Story House & Museum in 2015 (after being purchased from Prop Master, a collectables company, for $10,000). The other three are missing. Should you ever come across one, you’ll know it’s an original if it has the sundial, compass and a tassel, indicating that it is for a left-handed person like Peter Billingsly. Hold on to it, they’re worth about $200,000 each.

More impressive than the valuation of its collections is the benefit brought by A Christmas Story House to the city of Cleveland and the community. Through the non-profit A Christmas Story House Foundation, the Neighborhood Restoration Project provides grants to the house’s neighbors for projects to fix up and improve their own houses. The foundation’s largest fundraiser is the annual A Christmas Story Run, a 5K/10K starting in Public Square and ending at A Christmas Story House. This year’s run takes place at 9 a.m. on Saturday, Dec. 7; while it is probably too late to register, spectators are welcome.

This weekend, if you find yourself hankering for some early Christmas cheer, consider heading to A Christmas Story House, where Leg Lamps, Pink Bunny Pajamas, and bars of Lifebuoy soap abound. Oh Fudge!