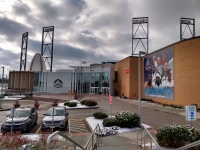 The Pro Football Hall of Fame. The original 1963 rotunda is visible on the far left. Photo by Rachel Polaniec

Magical History Tour welcomes the start of 2020 (and the end of another disappointing Browns season) at the Pro Football Hall of Fame in Canton, conveniently located an hour’s drive south off I-77.

With a sprawling façade both unabashedly retro and decidedly modern, the Pro Football Hall of Fame begins making an impression before visitors exit Interstate 77. A mural-sized banner covering one of the brick walls proudly proclaims the “Class of 2019: Kickoff of the NFL’s 100th Season.”

Here in Canton on Sept. 17, 1920, the American Professional Football Association was created by representatives from 10 professional football teams. Two years later this association became the National Football League, or NFL. The Canton Bulldogs would become the League’s first two-time champion in 1922 and 1933.

When it came time for the NFL to establish an official pro football hall of fame, the people of Canton ran a successful campaign to bring the hall to their city. Canton was selected in April 1961, groundbreaking commenced Aug. 11, 1962, and the 19,000 square-foot, two-building complex opened to the public on Sept. 7, 1963. After multiple expansions and renovations during the following decades, the 118,000 square feet of today’s Pro Football Hall of Fame contains something for everyone.

The visit begins with an optional jaunt through the “Hunt/Casterline Pro Football Hall of Fame Card Collection,” created by Dan Hunt and Robert Casterline. Their collection of over 300,000 cards is the highest graded and most valuable football card collection found in the world; a curated selection of the rarest, highest value, and most significant cards are on display.

Our tour proper begins on the ground floor of the original 1962 rotunda, with “The NFL’s First Century.” Snapshots include the pre-NFL years (1892-1919) followed by each succeeding decade, filled with informative text and lots and lots of memorabilia. Notable figures and important milestones include Jim Thorpe, pro football’s first indoor game, evolution of the football, the first NFL draft, Jim Brown, and international expansion.

The exhibit continues on the rotunda’s second level, featuring interesting material like year by year records, football pioneers, and interactive displays like “Get A Grip!” examining how a quarterback grips the football, and “Coach to Player Communication” with two audio-fed helmets, demonstrating how coaches are able to relay instructions to players in-game.

After the “NFL’s First Century” is the striking “Hall of Fame Gallery,” replete with bronze busts of the Hall of Fame enshrinees. The busts are one of three iconic symbols of becoming an enshrinee, examples of the other two – the Gold Jacket and the Hall of Fame Ring – are located nearby.

Up next is “A Game For Life: The Ultimate Locker Room,” a holographic experience located in the theater featuring inspiring stories and speeches from players and coaches. Exiting the theater is the unexpended yet charming Ford Hall of Fans, dedicated to those superfans whose consistent presence coupled with unique apparel made them a fixture of their team’s fandom.

Rounding out the top floor is the “Pro Football Today Gallery,” featuring current mementos, records, and football players and personnel, as well as the “Lamar Hunt Super Bowl Gallery,” containing history from past Super Bowls, all 53 authentic Super Bowl rings, and the Super Bowl LIV Vince Lombardi Trophy. From here it’s back down to the first floor, where we finish our tour with “Madden NFL,” the “Black College Football Hall of Fame Gallery,” and several displays dedicated to officiating, the United States Football League, and the Sunday Night Football broadcast.

So this January, if watching yet another Browns-less playoff season seems less than palatable, get your pre-Super Bowl football fix down in Canton at the Pro Football Hall of Fame, where a love of the game and respect for its history grounds the most fantastical forays into the athletic feats that continue to amaze and inspire us.