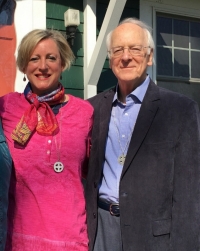 How did a Bay High alumna (class of 1986), with a degree in early childhood education, find herself as a national board member for the Order of St. Luke international Christian healing ministry, and in demand around the country today as a keynote speaker at OSL conferences?

It all began in 2006 when her father, David Ball, then convener of the Westshore Chapter sent his daughter a brochure about the upcoming local conference, featuring the Rev. Nigel Mumford.  At that time, Saran Warne's husband, Tom, was the young rector at St. John's Church in Huntingdon, PA, developing a congregation in the depressed industrial town. She was the stay-at-home mom, with their three active boys.

Saran says there was something about her dad's enthusiasm for the conference that touched her deeply, so she decided to make the five-hour drive, with three members of St. John's, to attend the conference. The rest is, as they say, "history"!

Deeply impacted by the conference experience, back in Huntingdon, Saran started an OSL group to bring the healing love of Jesus to those in her community. In 2010 Tom was "called" to be the rector of the Church of the Good Shepherd in Vancouver, WA. Subsequently, Saran began an OSL group in Vancouver which brought in speakers from around the world for their annual conference, typically with 100-plus attendees. As a gifted, inspiring organizer, Saran became the director of the five-state Region 6 in 2015 and in 2018 was elected to the national board by the U.S. membership.

Deeply impacted by her youth group experience at Bay Presbyterian in the 1980s, Saran is passionate about connecting with the young people of today. Currently she serves on the OSL Next Generation Task Force and will be presenting at the National Leadership Retreat in Florida on Feb. 20-22. Now that her youngest son is in high school, Saran recently became the youth director at the Church of the Good Shepherd.

The national director of OSL, the Rev. Josh Acton, has described Saran as "an anointed, loving and powerful speaker and leader." In 2017 Saran was the keynote speaker for the local River of Love Conference in Avon Lake. She was so well received she is delighted to have been invited back to the Westshore to lead the 2020 conference on March 20-21. For more information about the conference, visit westshoreosl.org/events.

Saran's father, David Ball, celebrates his 80th birthday later this year. He can't think of a more fitting "early birthday gift" than having his precious daughter, Saran, back in Bay Village, continuing the legacy of his commitment to the ministry of OSL, leaving a much bigger "footprint" than he could have anticipated when he mailed her a conference brochure in 2006!