The Museum of Divine Statues 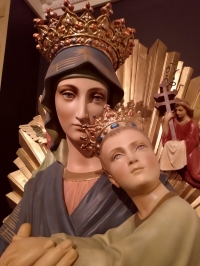 Museum founder Lou McClung's skills as a makeup artist are utilized for the faces of his restored statues. Photo by Rachel Polaniec

Three low, wide steps end at the sidewalk, a short distance separating visitors from the wooden double doors of the Museum of Divine Statues, located in the former St. Hedwig’s church. Converted from a community hall in 1975, the church served the parish of St. Hedwig, established in 1914 to serve the needs of Lakewood’s Roman Catholic Polish residents. In 2009, amid changing demographics and lack of priests and funds, the church was part of the 50 downsized parishes in Cleveland’s eight-county diocese; it closed that November.

It didn’t remain shuttered for long.

In April 2011, St. Hedwig’s found new life as the Museum of Divine Statues. The man behind the transition seemed to have been tailor-made for the roll: makeup artist, founder of Lusso Cosmetics, amateur collector and restorer of religious statuary – Lou McClung had it all. His hobby began small, restoring one little statue salvaged from a local antique store. The collection grew from there, with his purchasing of St. Hedwig’s over a decade later finally permitting display of the pieces in a proper museum setting.

McClung chose to gut St. Hedwig’s 1970s interior, reworking the space into a layout conducive to the museum-goers experience. Statues are arranged around the perimeter against the walls, with select pieces placed in the middle of the room as single or grouped displays. Unlike a typical church setting, the statues are placed at eye level for easy viewing. Alongside each piece is a series of cards, showing the artifact before it was restored and its former church location, as well as information about the saint or other personage depicted. Additionally, QR codes are available for visitors with smart devices; the museum rents tablets for those without.

Interspersed throughout the statues are other objects of interest, including relics and reliquaries, clothing and accessories, monstrances and stained glass, and an intriguing display on nuns' habits. Tucked into one of the corners, with a window overlooking the entryway, is McClung’s little workshop, where statues dating from the 1940s back to 1855 are given renewed beauty under the artist’s guiding hand.

The Museum of Divine Statues is a place of renewal, where culture, art, and history are recovered and restored. In its quiet recesses we find rejuvenation, for church statues and visitors alike.