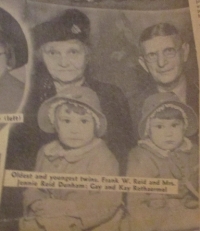 Kay Laughlin and her sister Gay were named the youngest twins at the Chardon Maple Festival in 1939.

We love our "real" maple syrup on our morning pancakes.

In America, maple syrup is a staple in the pantry.  Maple syrup/sugar is truly an American crop. Both maple syrup and maple sugar were items of barter among the Indians living in the area of the Great Lakes when the early settlers arrived in this country.

The Osborn family writes in their memories: “The Indians also furnished a tolerable amount of maple sugar (syrup). Sarah objected a little to using it, on account of cleanliness, for the Indians used to boil their bacon in the sap without skinning the hide, and the hair would come off, which looked rather unpalatable in tea. Some of the squaws were so nice, however, they would strain the syrup through part of their dress and the difficulty would be alleviated. Sometimes the dress was so dirty and full of holes they could not strain the syrup.”

It takes at least a barrel, 32 gallons, of sap to make a gallon of maple syrup. Maple sap as it comes from the tree is a sterile, crystal clear liquid with a sweet taste. The light amber color and flavor we are familiar with is the result of chemical reactions from substances in the sap brought about by heat as the sap boils.

Growing up in Bay, our acre yard at 31011 Lake Road contained 7 maple trees. Dad decided one year we would tap the trees. He purchased spikes which were then pounded into the trunks of the trees. Pails were hung for collection. Everyday we gathered sap for the maple syrup.

In the basement we had a two-iron gas burner next to the furnace. Mom had a large metal pot which we poured the sap into and started cooking. The sap was boiled each day it was collected down to a syrup. It took a long time. We enjoyed our maple syrup that year, but never again. It was just as easy to go to Chardon and buy it, which we did from then on.

In Chardon at their Geauga County Maple Sugar Festival, in the old days, there was a twin contest in the Methodist Church. In 1939, when my sister Gay and I were 2 years old, the family went to the festival. It was the second year for the twin event. There was a contest for the oldest and youngest twins. Gay and I won for the youngest twins there. We had our picture taken on the laps of the oldest set of twins. The picture was in the  Cleveland News. I still have the newspaper article, my letter of entry and the pamphlet of events from the festival. I also have a silver cup I won for being the youngest twin there.

The sap is running. Enjoy the "real" thing.