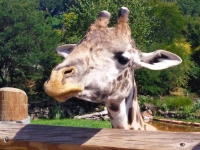 In keeping with social distancing, April’s Magical History Tour takes us on a memory-fueled journey to the Cleveland Metroparks Zoo. So crack open the photo album as we revisit a favorite Northeast Ohio attraction from the comfort of home.

A classic Cleveland crowd pleaser, the Cleveland Metroparks Zoo began on Sept. 15, 1882, when Jeptha H. Wade donated 73 acres of land and 14 American deer to the city of Cleveland in what is now University Circle’s Wade Oval. The arrival of the Cleveland Museum of Art in 1916 necessitated the move of the zoo’s small building and tiny but growing collection of animals to its current location in Brookside Park near West 25th Street.

Most of the zoo’s early menagerie were species native to the area, though there were some rather large exceptions like Minnie, Cleveland’s first zoo elephant, who joined the collection in 1907. By 1940 the zoo had added Monkey Island, Sea Lion Pools, and a bear exhibit. November 1940 brought Asian elephant Frieda, a favorite with zoo patrons until her death on Nov. 27, 1956. Her popularity no doubt contributed to the 1955 establishment of an African safari by dedicated zoo staff and enthusiastic supporters, adding two hippopotamuses, two rhinoceros, three giraffes, a variety of smaller animals, and three additional elephants joining Frieda.

The zoo received great patronage from the people of Cleveland, who approved $1 million bond issues to construct the Bird Building (1950) and Pachyderm Building (1955). At its official opening in 1956, the Pachyderm House’s master of ceremonies Gordon Stouffer (son of the Stouffer Foods founder) was almost trampled by a horde of excited children. The method used to train the elephants is now known as elephant school; training such large, strong animals to follow commands is essential for the health and vitality of both animal and human trainer. (Now if only we could train small children to not stampede unfortunate masters of ceremonies …)

April 1957 saw the founding of the Cleveland Zoological Society, who took over the operation of the zoo under contract with the city of Cleveland. The Society ran the zoo until the 1970s, when it came under the control of the Cleveland Metroparks.

Amid bell-bottom jeans and man-perms (looking at you, Dad) the zoo built The Primate & Cat Building (1975) and moved its original building, the Wade Deer Park Barn, from Wade Park to its present location next to Waterfowl Lake.

A favorite in Cleveland’s colder months, the RainForest covers two acres on the site of an old foundry. Begun in 1987 and intended as a genuine show-stopper, the RainForest was the Zoo’s first fully-immersive exhibit: As the doors slide open, visitors are greeted with the roar of the 25-foot waterfall, which cycles 600 gallons of water every minute. Piped-in ambient sounds (the zoo’s first) and a selection of 10,000 plants with origins in South America, Africa, and Asia complete the effect.

Located front and center of the zoo proper is African Elephant Crossing, always an excellent way to start one's visit. Clearly lavished with love and an attention to detail, African Elephant Crossing is quadruple the size of the first Pachyderm Building. The exhibit can hold up to 10 elephants at once, including one male and (eventually) young. Twice a day the lovely elephant ladies cross from one yard to the other of their five-acre enclosure, which features grasslands, trees, ponds, a heated outdoor area, and large sleeping space. Watching them cross is quite the treat, with each one stepping forward and passing through the gate in turn.

Speaking of treats, young and old alike are sure to be delighted by the Rosebrough Tiger Passage, opened in June 2016. Named for Northeast Ohio philanthropists Carol and Walt Rosebrough, the 15,500 square feet of habitat contains heated rocks (for the Amur tigers and visitors!), aquatic areas, and vertical climbing poles, as well as the required space for a breeding pair and cubs.

Nearby is the newest jewel in the zoo’s crown, Asian Highlands. The 1.3-acre exhibit is shiny yet serene: colorful flags fluttering over open courtyards, gently curving rooflines, and round moon gates, with delicate Asian-inspired music floating throughout. The red pandas, Amur leopard, and snow leopards inhabiting the new set piece were moved from their previous location over in Primate, Cat & Aquatics, while the zoo’s first takins (Himalayan goat-antelopes), arrived from the Columbus Zoo in June 2018.

In celebration of Asian Highlands, the zoo hosted the Asian Lantern Festival in 2018 (and again in 2019), featuring eye-popping shapes, patterns, and colors splashed across our favorite zoo animals as larger-than-life lanterns. The lanterns were brought to Cleveland by Tianyu Arts and Culture, a subsidiary of Sichuan Tianyu in Zigong, China, creating an entirely new zoo experience for first-time visitors and seasoned guests alike.

While trips to the Cleveland Metroparks Zoo are currently out of reach, our collected memories and mementos will continue to tide us over until our zoo welcomes us once more. Until then, stay safe my friends.

I live in Westlake with my husband and our three sons. In my free time I like to read, write, and cook. My family and I take part in War of 1812 reenactments throughout the summer. My lofty dreams are of traveling abroad, visiting the great museums, and drinking coffee at cafes. For now I content myself with antiquing and local coffee.