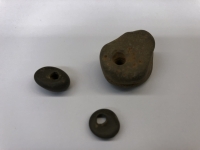 According to archaeologists it was during the Late Archaic period, about 3,000 to 5,000 years ago (1,000 to 3,000 BC) that the native inhabitant population increased greatly in northeast Ohio. This is based on the sheer number of archaeological sites and dramatic increase in the number of stone grinding implements and “hardware” found in northeast Ohio. This stone “hardware” includes hooks and net sinkers used for fishing.

About 20 years ago, Denise Rosenbaum, clerk of Westlake City Council, found what her brother-in-law called “Indian sinkers” at Huntington Beach. A quick perusal of the internet shows that the most common form of net sinker, found worldwide, is a flat stone, notched on two sides, used to hold a net on the bottom of a body of water. Not much effort is put forth to make these net sinkers because they are easily lost. The ones that Denise found have holes drilled in them.

The question archaeologists have is why would someone spend that amount of effort to drill a hole when a notch could accomplish the same purpose? It is possible that they were used to hold a single fishing line down or are for some other purpose. Like many artifacts their true purpose can be problematic to identify. The internet also has similar pictures describing them as stone beads. Another considers such “drilled” holes as naturally occurring, who knows? But, considering that they were found on a beach it makes sense that they would be somehow related to fishing and are a fascinating find.

Jim Wang, who spent his early years in a home across from the current Westlake Police Station on Dover Center Road, owns part of the Wilbert/Wang collection documented in the Ohio Archaeological Inventory. Jim told me that the patriarch of the Wilbert family, who I discovered was Casper Wilbert, is the one who collected them.

Adam and Elizabeth Wilbert (possibly Casper’s parents) purchased seven acres of land in 1871 near what is now Bradley and Center Ridge roads. Casper purchased four of those acres from them in 1878. It is during these early years that he might have started his collection. In 1888 Casper purchased 34 acres of land on Dover Center Road. County records indicate that he built the existing house at 1793 Dover Center Road in 1893. It is most likely these 34 acres, with their proximity to Cahoon Creek, that yielded the bulk of his collection.

At the time of his death in 1914 two of his sons had already built homes on parts of his original land at 1709 and 1743 Dover Center Road; a third son built a house shortly thereafter at 1813 Dover Center Road. This is the home that Jim Wang’s parents, John and Gretchen Wang, purchased from grandsons of Casper – Clarence, Robert and Harold – in 1956. It was Harold who passed on the artifacts to John Wang, when John showed an interest in them.

Jim Wang told me that his own grandfather was a prolific collector of Native American artifacts in the Alliance area of Ohio. When Jim’s father John died, both the Wilbert and his own grandfather’s collection were divided between the four grandsons. His father mounted the artifacts and indicated which were from the Wilbert collection found in Dover. That provenance is what makes them a treasure for the Westlake community.