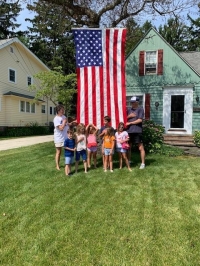 The Croyle and Granja families, along with Doug and Gay Borchert, recite the Pledge of Allegiance.

On July 2, neighbors were invited to attend a flag-raising ceremony in front of retired Bay Middle School social studies teacher, Doug Borchert's, home. The invitation read, "Tomorrow we will hang up in our front yard the flag that covered my Dad's coffin ... Capt. Jay Bender, U.S. Army, served almost 4 years in the Pacific in WWII. We will also remember Doug's Dad, Pvt. Ben Borchert, who served in Europe and received the Purple Heart and the Bronze Star. If you can, join us as we begin our joyous yet reflective celebration of Independence Day. God bless America! – Gay Borchert"

At 9:00 a.m., 12 adults and eight children gathered as Mr. Borchert spoke about the sacrifices our veterans in general, and our two fathers specifically, have made since our country was founded. He read the last few statements from the Declaration of Independence and explained why we were raising Old Glory on July 2 and will do so again on July 4.

On July 2, 1776, the document was submitted to the Continental Congress and signed by John Hancock. On July 4, it was made public. The flag went up as those gathered joined in singing the national anthem.

Gay Borchert is a longtime Bay resident and former speech pathologist with the Bay Schools.