Researching the history of Native Americans in Dover 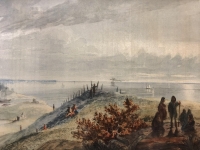 Watercolor painting titled "Lake Erie, from Cleveland" by Seth Eastman, 1833. It shows a group of Native Americans standing in the foreground on the east side of the Cuyahoga River. In the distance are the shores of Lakewood and Bay Village. Accessed from clevelandareahistory.com. Courtesy of Sloane and Kenyon Auctioneers and Appraisers, Bethesda, Maryland.

Ken Keeler was born in Westlake around the city’s Sesquicentennial – 1961. He and his family have been longtime members of the Westlake Sportsman’s Association which at one time owned large tracts of land in Westlake. He continues to live in Westlake and has always loved hiking the fields and woodlots in the city.

In the 1980s he explored the former Jurgemeier farm, near the southwest corner of Crocker and Detroit roads, when the soil was scraped into huge dirt piles to flatten the ridge where the Promenade Shopping Center was being constructed. He told me about how in a matter of minutes he unearthed a Native American knife made of red flint, a sizable chunk of unworked flint and other tools made of a stone that is not indigenous to this area. This leads him to believe that it was the site of a long-ago Native American camp or village.

Ken also told me about talking with the recently deceased Roger Cooley. Roger’s 2nd-great-grandfather, Asher Cooley, arrived in Dover in 1818.

Roger told Ken that the old-timers in Dover called the huge oak tree in the rear of Evergreen Cemetery, the “Council Oak.” As mentioned in a previous Digging Dover column on Moses Cleaveland trees, this 81-inch diameter tree is estimated to have started growing in 1693!

Roger stated that Indian artifacts were found under that tree in the early days. Late in life Roger and his wife, Lolly, developed a one street cul-de-sac west off of Crocker near Center Ridge Road on land that they inherited. They named the street “Indian Ridge” and now we may know why.

A book published in 1978 titled “Historic and Archaeological Resources of the Urban County Block Grant Communities” by the Cuyahoga County Department of Community Development has a section on Westlake stating that 10 archaeological sites were found when they did a survey of Westlake, yielding materials from all prehistoric periods. They say that the two largest collections – Wilbert/Wang and Peasel/Serne (mentioned in previous Digging Dover columns) were found east of Cahoon Creek. They say there was no evidence of any but intermittent Native American occupation in Westlake but acknowledged that construction may have obliterated evidence of longer occupation.

As for Bay Village, they found two sites, each containing projectile points of the Archaic (8000 to 1000 B.C.) and Late Middle (100 B.C. to 500 A.D.)/Early Late (500 to 1000 A.D.) Woodland periods. One site was located near Lake Erie, the other on Wischmeyer Creek. They state that from other sources, it is known that Early and Middle Whittlesey phase sites were scattered across the shoreline in this area.

The Bay Village portion of Lake Erie may contain or have contained the western limits of Whittlesey occupations. Whittlesey ceramics have been located around the junctions of Cahoon Creek and Lake Erie. They go on to say that in northern Ohio the Whittlesey focus is associated with the Late Prehistoric Period (1000 to 1650 A.D.) and that Cuyahoga County is a major area of Whittlesey focus occupation.

The Whittlesey culture or focus is an archaeological designation referring to a Late Prehistoric/Late Pre-Contact North American indigenous group that occupied portions of northeastern Ohio. It is named for Charles Whittlesey, a 19th century attorney, topographic engineer, geologist and archaeologist who was a founder of the Western Reserve Historical Society.

A big disputed question is whether the Erie Indians, who were wiped out by the Iroquois as a nation before 1660 are one and the same as the Whittlesey focus people. What is in agreement is that our area was part of a neutral hunting ground for Native Americans after the demise of the Eries, before the settlement by whites.

Settlement began west of the Cuyahoga River in 1805 after Indians in Fort Industry near Toledo gave up their title to the land. When the pioneers from New England settled Dover there were few Native Americans left in the area.

In 1874, Crisfield Johnson, in his history of Cuyahoga County, states that Indians were friendly and helped Leverett Johnson, the first settler of what became Westlake, to do farm labor. He also relates that the daughter of Daniel Page (an early settler in the extreme northwest corner of what became Bay Village), while “sojourning” in an adjoining township [Avon?] was carried away by Indians and after a brief captivity was “recaptured” by United States soldiers.

According to Virginia Chase Bloetscher’s 1997 “Indians of the Cuyahoga Valley and Vicinity,” the historic-era Indians in this area at the time of European contact were the Lenape (Delaware), Iroquois, Mingo and Ottawa. The latest U.S. Census (2018) estimates that there may be about 14 American Indians in Westlake (from the Chippewa [Ojibwa] tribal group) and none in Bay Village.