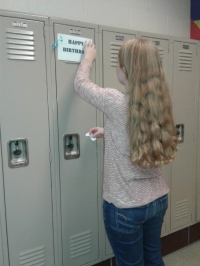 At the start, it was just a simple idea of making everyone feel welcome on their birthdays.  We didn’t really know if it was going to succeed or even become a club. We were not really planning on it being an actual club, but it ended up that way, created by the three of us.

In the summer of 2019, as we entered eighth grade at Bay Middle School, Mrs. Lang helped us form an idea for this club. We were all thinking about how decorating lockers are allowed in our school. It had its own pros and cons as many children would get their lockers decorated every year, and others have never had their lockers decorated at all. We all very well understand why it is not allowed in other schools, but in our school, we did not want the privilege to be taken away, so we improved it.

One day, we got together out of the blue and decided to try and see if the subject would even work out. We were skeptical if our idea was going to be approved by our principal. We sent an email, basically stating: “Here is our baseline for the club. Every Friday [and Wednesday] we go around and stick a 'Happy Birthday' sign on people's lockers that have their birthdays in the following week.” We thought this idea would at least recognize everyone’s birthday, besides the announcements.

Our principal absolutely loved the idea and wanted us to start right away, which was a few weeks after our school had started. We had a meeting with him and we talked about how we would put the signs together, where we would put them, on what days and where the supplies would come from.

We had four designs, fonts and colors, for our birthday signs. Our PTA was generous enough to provide us with paper, colored ink and ribbons. The staff members of our school were also very generous and donated other miscellaneous items. The office secretaries gave us a list of everyone’s birthdays for each month along with that person’s grade and locker number.

We then gave the office a message to put on the announcements stating that we were a club and would want all the help that we could get. Our first two meetings were informational like what the club was, meeting dates, how to set up the signs, and why we decided to start the club. The members of the club were recruited to help us every Friday and Wednesday after school, so long as they had no other conflicts.

After a few meetings, we started to have assigned jobs. There was one person taping ribbons, taping the back of the signs, writing the locker number and grade on the back of the signs, curling ribbons, and placing the signs on the correlating lockers. When there was an abundance of signs, we all pitched in to help put the signs on the lockers. We were a small but mighty team. We worked hard and even when we had many birthdays, our team was done in less than 20 minutes.

When we decorated the lockers, we saw the effects. The decorating made sure that every student felt included and welcome in our school, as well as starting their birthday off right! Staff members complimented what we were doing, as well as parents. They always tell us what a good idea it is to make sure that everyone feels special on their birthday, as well as included. We all enjoy giving our peers the joy and appreciation that they all deserve.

Even though we're moving on to high school this year, we believe that the club will continue at Bay Middle School – but COVID-19 could affect the plans.