The 19th Amendment: Proof that one vote counts 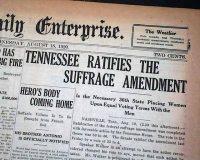 It was a sweltering day on Aug. 18, 1920, when the Tennessee House of Representatives met to consider whether or not to ratify the proposed 19th Amendment to the U.S. Constitution, written to ensure that the right to vote could not be denied based on sex. The Tennessee Senate had already voted to ratify.

Proponents and supporters of the amendment had been buzzing around the legislators like swarms of bees, as were reporters from across the nation. The two Ohioans running for president that year, Governor James Cox and U.S. Senator Warren Harding, were watching closely and wondering how Tennessee’s actions would affect their election prospects.

The House vote resulted in a tie. Then, Representative Harry T. Burn changed his vote to “yes” and Tennessee became the pivotal 36th state to approve the federal amendment. After the necessary certifications at the state and federal levels, the 19th Amendment was officially proclaimed as the law of the land on Aug. 26, 1920.

A capsule review of the effects of the 19th Amendment and its key players in Northeast Ohio has just been released by the Cleveland History Center at the Western Reserve Historical Society and TELOS Productions. Readers are encouraged to view this documentary on home computers and smartphones, or to see it on a large screen in person at the Center. The 15-minute film, "Failure is Impossible," is available on YouTube at bit.ly/2PRnHer.

The film accompanies a new permanent exhibit at the Cleveland History Center, Women and Politics, that will open as a new virtual experience in the coming weeks.

By August 1920, suffragists had advocated for the right to vote for women for more than 70 years and were eager to put major effort into preparing women to vote in the 1920 Presidential election. According to the Wikipedia entry for the 1920 United States Presidential Election, "The total vote for 1920 was roughly 26,750,000, an increase of eight million from 1916. The Democratic vote was almost exactly the same as [that party’s] vote in 1916, but the Republican vote nearly doubled, as did the 'other' vote."

While this great increase in the total number of votes is mainly attributable to the passage of the 19th Amendment, it must be noted that many women – Native Americans, women in the U.S. territories, and immigrant Asian-Americans – were not eligible to vote until federal legislation was passed in the 1950s and 1960s. Many Black women, while technically eligible in 1920, had barriers such as poll taxes and literacy tests blocking their way.

An exhibit displaying significant times in the history of women’s suffrage is now on display at Westlake Porter Public Library, in observance of the 100th anniversary of the League of Women Voters (LWV). The Westlake-North Olmsted Chapter of the LWV of Greater Cleveland was organized in the mid-1950s.