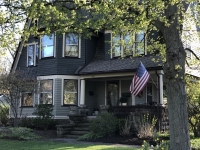 The house at 2404 Dover Center Road was probably constructed around 1900, but definitely no later than 1914.

Most of the century homes in Westlake are vernacular farmhouses – meaning they were built with no architectural style or pretensions. The house at 2404 Dover Center Road is different. It has elements of both the Queen Anne and Shingle styles. Queen Anne because of its turret and asymmetry and Shingle style because it is covered in shingles and the rest of its massing is simpler and more modern then a fussy Victorian home.

Its rusticated sandstone steps and foundation and thick Doric porch columns also have an element of the Romanesque. It is one of the most handsome and well-preserved homes in Westlake.

The parcel of land that the home is constructed on is part of Original Lot 45. As early as 1864 and possibly earlier the Porter family owned this land on the west side of Dover Center Road, north of what is now known as Bassett Road to today’s Westlake Middle School. This is the same extended Porter family that includes Leonard Porter, the namesake of Porter Public Library.

Loretta C. Porter, the daughter of Laura L. Porter (nee Lilly) and Dan West Porter, married Jacob C. Miller and had two children, including Carrie who was born in 1866 and Dan T. Miller who was born about 1868. Online records indicate that Jacob Miller died by 1870, Loretta by 1884, apparently leaving Carrie and Dan T. Miller as orphans at 18 and about 16 years of age.

Carrie married Frank Sadler of Bay Village and when about 25 years of age Dan T. Miller married Ida B. Standon of Lorain County on Dec. 27, 1893. While her name is listed as Ida on her marriage record, on property deeds as early as 1894 her name is listed as Addie. She and Dan T. sold off parcels of land along this stretch of Dover Center Road in 1894 and 1899, which is actually when 2404 Dover Center Road may have been built.

The 1910 Census has he and Addie living in Dover with 14-year-old “Audra” Miller and 4-year old son John Miller. Dan’s occupation is listed as “attorney” in general practice. The Census-taker interviewed the property owners to the south of 2404 on 1903 map before them and the property owners to the north of 2404 afterward, which pretty well confirms that they were living at 2404 Dover Center Road, most likely in the current home.

It appears that Dan probably did well as an attorney to most likely build and definitely own 2404 Dover Center Road. It is probable that he inherited property at his parents' deaths which gave him a good start financially. How he transitioned from farmer to attorney between 1900 and 1910 is not known. Later Census records indicate that he attended five years of college.

Dan and Addie are both listed as 52 years old in 1920, “Audia” as 24 and John as 13. The family prospered and a 1924 West Palm Beach, Florida, directory has them occupying homes in both West Palm Beach and “Cleveland, Ohio.” The home in West Palm Beach is less than one mile from prominent Clevelander Henry Flagler and several blocks from the West Palm Beach courthouse. The 1930 Census has them all living on Dover Center Road in Westlake, not only 63-year-old Dan and Addie, but their adult children, 34-year-old “Audra” and 24-year-old John T.

This is where things get interesting. In 1935, in the depths of the Depression, they lost the house at 2404 Dover Center Road in a sheriff’s sale to the First National Bank of Rocky River.

The 1940 Census has the 74-year-old Addie living alone as a “widow” at the same address she shared with Dan in West Palm Beach in 1920. Dan T. is listed as a 72-year-old “widowed” “boarder” living at 11105 Detroit Road in Cleveland, where he has lived at least since 1935. He is working 52 weeks a year as an attorney. The head of the household at that time is 42-year-old Connie O’Donoghue who works as a legal secretary and her 22-year-old son Paul O’Donoghue.

If walls could talk.