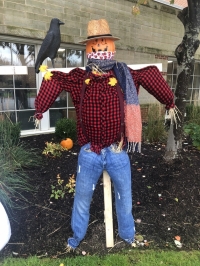 This scarecrow took top honors in the Most Original" category. Photo by Rakayla Iwais

Westlake residents were invited to put their creativity to the test during the 8th Annual Scarecrow Festival. Entrants were given a scarecrow building kit to be completed and delivered back to the Westlake Recreation Center by the last week of October to be displayed for all to enjoy.

A balloon-toting "IT" clown scarecrow won first prize for "Scariest" entry. The "Most Original" title went to a Jack-o-Lantern-headed scarecrow with a friendly crow on its shoulder. And last but not least, a tattered black bird scarecrow, submitted by the Tomkalski family, won for "Most Creative."

Two of the winning entries came courtesy of United Consumer Financial Services. The UCFS IT department entered the "IT" scarecrow (fittingly) and the company's underwriting department assembled the one crowned Most Original.