A marathon of perseverance 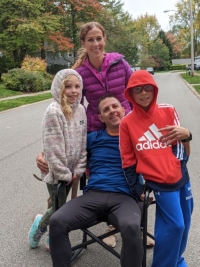 Chad Pado is joined by his wife, Kristen, and children, Olivia and Jack, after completing the Columbus Marathon virtually by running the streets of Bay Village.

Since March, if you found yourself on Lake Road before dawn between Bradley and Clague, there is a good chance you passed Bay resident Chad Pado running. If you were on foot as he passed, you were likely greeted with a warm "Good morning."

On the morning of Sunday, Oct. 18, the culmination of seven months of that daily routine was achieved with the successful completion of the Columbus Marathon accomplished virtually in a time of 3 hours and 38 minutes. Run entirely on the streets of Bay, the marathon included long stretches on Lake and Wolf as well as sections of Bradley, Clague, Walker, Walmar, Carlton and Cahoon.

The gravity of his achievement was certainly not lost on those that knew Chad's story. In April of 2019, the idea of running a marathon was not a high priority. At 43, Chad had hip replacement surgery and was more focused on just walking again. However, if you met Chad as I have you would quickly conclude that he is a person of quiet conviction and strong determination. A former educator, high school basketball coach, and college athlete, it is no surprise that his perseverance and self-determination would allow him to overcome any physical setback and cancellation of the in-person marathon and finish his marathon.

The months leading up to the race proved the importance of community involvement, a hallmark of Bay Village, in Chad's success. From the homeowner on Clague and another near the corner of Wolf and Columbia who welcomed his storing of energy bars and Gatorade in their yards as he trained, to his family and neighbors on race day who provided rehydration stations and emotional support along the route, Chad was surrounded by the warm support necessary to a lone marathoner.

During the race, he was joined by a number of friends to provide companionship. Most notably, as Chad completed mile 17, two fellow Bay Village residents, Craig Martin and Jeff Scheid, joined him for what unknowingly turned out to be the final 6 miles. Craig and Jeff helped pace Chad, kicked away any sidewalk obstacles including what seemed like an endless sea of acorns, and stopped traffic at several street lights.

As Chad ran up Carlton at around 10:30 a.m., he was cheered by his wife, Kristen; son, Jack; and daughter, Olivia. Doubtless, seeing the outpouring of their love proved the greatest recognition of an achievement that seemed implausible in April of 2019.

Jake Kamm is a Bay Village resident who until June 2016 was a college professor.  He and his wife Alyssa have three school age children Ben, Lily, and Ava.