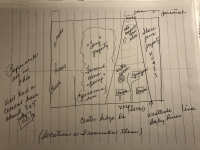 The "Treasure Map" drawn from memory by Nancy Nosko. Photo by Will Krause

In 2015, Case Western Reserve University professor Gary Previts emailed the mayor of Rocky River with a fascinating story. He explained that in the 1920s, boy relatives of his were out playing and discovered some muskets and scabbards/swords and brought them home. The mother of the house immediately threw their finds down the water well.

Attached to the professor's email was a hand-drawn map with the location of the well, marked with an “X”. The professor wondered if there could be any connection between what they found and Bradstreet’s Disaster which occurred in 1764 in what is now Rocky River?

Because the well was located on a farm on Center Ridge in Dover (now Westlake), just over the city line from Rocky River (east of today’s Berry-McGreevey Funeral Home in Westlake), the mayor of Rocky River, Pam Bobst, contacted the mayor of Westlake, Dennis Clough. Mayor Clough, knowing about my interest in history, forwarded the email to me and asked me to investigate.

At first, I was skeptical because Center Ridge Road is miles from Lake Erie and the beach where Colonel Bradstreet had his difficulties. My understanding was that after many of Bradstreet’s boats were destroyed in a fierce storm the 500 men who could not be accommodated in the remaining boats walked back to Fort Niagara on an Indian trail where Detroit Road is now located, not Center Ridge Road.

The professor’s relatives were named Nosko and the farm and the buildings on the property as per a 1927 plat book matched up just as depicted on the hand drawing, done by memory by his relative years ago. Further examination of a 1920 plat book showed that Spencer Creek that empties into Lake Erie at Bradstreet’s Landing meandered through Lakewood Park Cemetery after passing under Center Ridge Road in a deep ravine (which still exists west of the River Plaza shopping center on the north side of Center Ridge in River).

If the boys were playing in the ravine half a mile east of their home or on future Westwood Country Club land, suddenly the story seemed plausible.

Over the last couple hundred years, early 18th century coins, engraved silverware, muskets, swords, cannonballs and bayonets stuck into trees and encased by subsequent bark growth have been found in Rocky River. Either on the beach or on the high ground nearby. The assumption is that the artifacts represent items lost when the boats were swamped by the waves or are items weary British soldiers and provincials ditched when they began their long march back to Fort Niagara in the New York colony.

Why would the mother throw the items down a water well? It is probably the 1920s version of “you are going to shoot your eye out with that thing.” Unless it was sheer panic, one assumption might be that the well the weapons were thrown down was an abandoned well, because who would want to foul their source of water? On the other hand, abandoned wells were often used as trash pits on farmsteads. If the well had dried up and been abandoned then there is hope that the artifacts might still be intact today rather than rusted into oblivion.

The Nosko family owned the property from 1919 to 1985, then it was sold to Fairland builders who developed Hunter’s Point Lane, south off of Hilliard Boulevard, on it. Except for an emergency access drive for this cul-de-sac, the frontage along Center Ridge Road remained undeveloped.

After doing the research my next task was to contact the current land owner to see if they would be open to some exploratory digging on what is today a wooded site. Fortunately, their offices are in Westlake and after they reviewed copies of the research with their attorney, they seemed amenable.

Members of an Ohio bottle club were contacted. They explained that wells are difficult to dig because they are often stone lined and narrow so that it is difficult for a hand digger to maneuver their shoulders to remove the materials from the bottom of the well. They said they would be willing to assist in locating the well and offering advice on how to retrieve the artifacts. The project stalled when neither city was willing to dedicate city staff and equipment to do any digging.

The professor first contacted Rocky River back in 2015 because he was concerned that there was a “For Sale” sign on the property and he wanted people to be aware that there may be a bit of historic treasure there. The “For Sale” sign is gone now. The property remains vacant but it is probably only a matter of time before something is constructed on it as well. Hopefully before that happens someone will do some treasure hunting.