A gift for all seasons 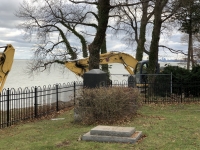 View from within Lakeside Cemetery looking northeast at heavy equipment and the Cleveland skyline in the distance. Photo by Will Krause

Benjamin Franklin said “Show me your cemeteries and I will tell you what kind of people you have.” Thanks to Mr. Charles (“Tallie”) and Mrs. Carolyn Young, Bay Village Lakeside Cemetery is saved! They epitomize the kind of people that make Bay Village the fine community that it is.

“Retracing Footsteps” by Catherine Burke Flament is an excellent source for all things Lakeside Cemetery. Here are some of the facts gleaned from that book: The cemetery was founded in 1814 when Reuben Osborn’s sister-in-law and infant nephew were accidentally drowned in the Rocky River. Reuben donated some property on the north side of Lake Road for the first public burying ground in Dover Township. Eventually Reuben Osborn’s land was divided between his descendants and through the years the cemetery has been expanded to the approximately half-acre that it is today.

It was in 1877 that Reuben’s grandson David Deforest Osborn sold land to the trustees of Dover to expand the cemetery to the north, east and west of the original. At that time an additional 28-foot-wide piece of land to the east was purchased from others as well. David Osborn had grown up in his father Selden’s house which still stands at 29059 Lake Road, located diagonally southwest of the cemetery.

Because the first three generations of the Cahoon family are buried in Lakeside Cemetery, Ida Cahoon’s Will of the early 19th century includes a statement that Lakeside Cemetery is to be sacredly cared for and if need be protected to the north by a stone wall but is never to be removed from its current location.

During the 1970s about 40 feet of waterlogged land was lost to the lake. At least one casket was said to have been partially exposed by the landslide into the lake. At that time a rebuilding process was begun by the City of Bay Village and the Army Corps of Engineers. Steel mesh baskets filled with stones, and land were added to the north. Erosion since that time threatened the cemetery yet again.

It was at a meeting of the Bay Village Historical Society trustees that I learned about this problem and that it was already in the midst of being solved thanks to the generosity of Tallie and Carolyn Young.

The Youngs live at 29039 Lake Road, just east of the Selden Osborn house. I had heard, but cannot verify that the core of their home consists of two former Osborn structures that were joined together years ago. A 1914 Hopkins plat book shows a 26.87 acre parcel with the Selden Osborn home and two other structures set much farther back on the parcel. Hopkins plat books for 1920 and 1927 show a rectangular home in the same location as the current one and the County Auditor lists the year built as 1920.

In 2008 the Youngs purchased the home from “B. J.” Schwartz, another community minded soul who spearheaded the replacement of the cemetery fence in the early 2000s. In addition to the house lot on the south side of Lake Road, the purchased property includes narrow parcels of land which nearly encircle the existing cemetery on the north side of Lake Road. When the Youngs purchased the home they did extensive additions and renovations, including adding a large central tower to give themselves a lake view over the cemetery. When they want to experience the lake more intimately, they just cross the street, walk alongside the cemetery fence and use their lakeside patio with fire pit and bench.

The Youngs could have haggled with the city over who would pay for what because any improvements to the lakeshore would benefit both their property and the cemetery. They simplified the matter by offering to pay for all of the improvements themselves. This donation must be well in the six figures.

On Aug. 31, 2020, Resolution No. 20-79, accepting their donation of shoreline work, was passed by Bay Village City Council and the Cahoon Memorial Park trustees. The actual physical shoreline work continues as this article goes to press. From the westerly stone pier in Huntington Park the heavy equipment can be seen constructing that stone wall that Ida Cahoon predicted might be needed years ago.

Since this is the Christmas edition of the Observer it seems appropriate to bring to mind Dickens' classic story “A Christmas Carol.” Instead of the ghosts of Christmas past, present and future being conjured up to reform a Scrooge we ask that the spirits of Bay Village residents past, present and future bless the Youngs and all those in the Bay Village and Westlake communities that make this such a great place to live!

Merry Christmas, and as Tiny Tim said, God bless us, every one!