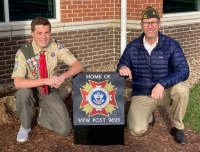 Ryan has volunteered to set up tables and chairs for their meetings over the past four years. Members had been looking for ways to increase awareness of the Post. Ryan worked with Post Commanders, Fred Green and Geoff Belanger, to design a granite marker for the building entrance. The deep black marker is inscribed with the VFW’s Cross of Malta Seal in full color. The marker was created with the assistance of the Lang Monument Company of Canton. The company was established in 1894 by E.D. Lang, purchased by Fred W. Allison in 1945, and has stayed in the family ever since.

Tim Allison, president of Lang Monument, is Ryan’s grandfather. Mr. Allison was an officer in the United States Navy and served in the Vietnam War. He has passed along his patriotism and respect for our troops to Ryan and his family. Ryan is pleased to honor all veterans through the completion of this project!