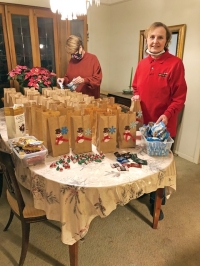 The Bay Village Community Council is proud to announce the 2021 Citizen of the Year, Nancy Trainer, and Project of the Year, the Bradley Park Playground upgrade.

The BVCC received a number of outstanding nominations this cycle and the selection committee considered each one carefully before arriving at a unanimous decision. A celebration will be held in the near future. Details will be provided when the arrangements have been made.

CITIZEN OF THE YEAR: NANCY TRAINER

Nancy moved with her family to Bay at age 3 and attended Bay Schools through graduation. She went to Bowling Green State University and worked at the U.S. Treasury Office. She learned the benefits of volunteerism at an early age, and has spent her life, particularly after retirement, in service to the community.

“My earliest memories of volunteering were trimming bushes with my siblings while my father cut the grass at Baycrafters’ Station house, a task the Metroparks later took over,” Nancy recalled. “My mother was on Baycrafters’ board, then later became heavily involved in veterans organizations – both parents served in WWII. I assisted with her organizations until retiring from my job, then volunteered within our community and quickly learned every group needs assistance.”

“The Women’s Club supports community projects and helps members remain independent and engaged through socialization and learning. LENSC teaches us about our natural world while rehabilitating injured wildlife. The Garden Club provides educational programs and beautifies our town. LWV educates and advocates for a strong democracy.”

Many volunteers realize the altruistic rewards of helping others, but Nancy sees an even more important benefit – longevity.

“Each organization has rewarded me with friendships, learning, and the satisfaction of contributing. They support my passions for nature, gardening, responsible citizenship, and for helping others remain independent and engaged. My mother is now 97 years old and slowing down. Obviously a lifetime of volunteering is healthy.”

While Nancy has spent nearly her entire life helping others, the Citizen of the Year selection committee was especially touched by the extra effort she showed during the challenges of the Covid-19 pandemic.

Since the pandemic began, Nancy has coordinated with the younger members of the Women’s Club to support older or at-risk members. Her team distributed face masks, delivered food and supplies to homebound members, initiated a book club to keep members engaged, handed out custom-decorated goody bags and, more recently, helped members sign up online for the vaccine.

Nancy’s impact on the community is best summed up by the words her nominator wrote in the Citizen of the Year application: “No one is more committed to making Bay residents feel good about Bay!”

A child’s wish for a better playground close to home led to a years-long endeavor that finally culminated last year with the installation of new, upgraded equipment at the Bradley Park playground.

Peggy Drumm has spent the past five years advocating for an improved play space for families on the west side of Bay Village. She attended City Council meetings, went door to door to raise awareness and funds, and launched a social media campaign.

And it all started with her daughter’s request.

“Five years ago we moved from central Bay to the west side of Bay and our daughter was always asking to go back to the park in the center of Bay to play because Bradley Park’s playground was so outdated,” Peggy said. “This inspired me to ask the city about the process to get Bradley Park updated.”

City leaders were enthusiastic about the citizen-led project that Peggy spearheaded.

“I’m very pleased with their efforts,” said Councilman Peter Winzig, who chairs the Recreation and Park Improvements Committee. “They believed in the project and stayed with their fundraising efforts over many years, working with the neighborhood community to see that the project was supported and co-funded by residents.”

The group also received support from the city and civic organizations.

“The City and Recreation Department, especially [Rec Director] Dan Enovitch were helpful in guiding us,” Peggy said, “and thankfully The Village Foundation also assisted us in allowing us to run donations through them.”

The new play equipment includes a swing set, climbers, teeter-totter, spinner, spring riders and musical items. Winzig is working with the city’s recreation and service departments to complete the site with comfortable seating shade canopies, a garden area, landscaping and a pathway to the restrooms.