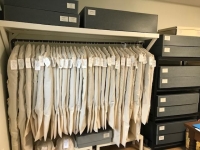 Historical garments hang on padded hangers in specially designed bags to preserve them for generations.

Even though the doors at Rose Hill Museum have been closed to the public for the last year, a lot has been going on to assure that future generations can enjoy its collections.

Volunteers at Rose Hill Museum, under the direction of Bay Village Historical Society President Cathy Flament and working according to COVID-19 safety guidelines, have spent the last 10 months reorganizing, cataloguing and preserving the museum’s costume and textile collection. Flament said that she would like to recognize the efforts of former Rose Hill Director Janet Zvara and faithful volunteers Marj Elhardt, Sue Jachnick and Diane Pavan, in particular. Of the 2,000 items in the collection, more than 800 items had never been documented. Each item had to be stored in archivally appropriate materials to protect it for generations to come.

“Now that we have professionally preserved the costume and textile collection, it will be much easier to monitor and identify the items,” Flament noted. “Each item has been assigned an appropriate number that has been entered into a museum program along with its description, source, condition, relation to other items and photograph.”

Flament said the project averaged 125 mostly volunteer hours per week. About 115 garment bags with tie openings in addition to padded hangers were constructed for the hanging garments. Twill tape with the object numbers were hand sewn into each garment. Special partitions were created to house smaller items. Flags were rolled on specially constructed tubes.

The project was financed in part by a generous grant from the Bay Village Foundation, Flament added.