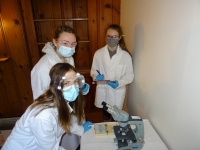 While the world was scrambling for cleaning supplies, three local Sea Scout ninth-grade girls decided to take the initiative and develop a solution. These scouts decided to use science to solve the problem of store shelves empty of disinfectants. Each girl searched for two recipes that contained materials that most people have easy access to or grown in their backyard.

“We wanted to use ingredients that everyone would be able to use so they could successfully replicate our results,” said Heidi Moody. The girls then experimented to see the most effective solution. They swabbed their refrigerator door handles without a cleaner as a control, and then each handle with a different recipe that they developed. After placing the swabbings on agar in Petri dishes, the girls took the sealed plates to a laboratory to see if bacteria would grow. The results were exciting. While some recipes didn’t work very well, some show promising results.

Recipes containing essential oils of lavender and oregano worked but allowed some bacteria growth after 15 days. It was surprising because these oils have been in use since ancient times. The best formula or recipe that produced minimal bacteria was as follows:

Directions:
Collect 60-80 leaves of English Ivy. Rinse the leaves in running water. Shred the leaves into a pot and add 4 cups of water. Boil for 15 minutes and put into a jar to sit overnight. Remove the leaves with a sieve and drain the jar into a spray bottle. English Ivy contains saponin, which makes soaps.

Ivy is very plentiful in our communities, and with this simple recipe, there is no excuse if the store shelves are empty of disinfectant. The three Sea Scouts plan on entering their STEM project in the U.S. Army-sponsored eCyberMission Competition this spring.