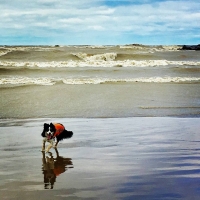 Bay Village resident Janet Kelley is a Canada Goose wrangler for Ohio Geese Control, a company that has been humanely managing goose populations in public parks, beaches and marinas since 2004. Janet works with her partner, Cowboy, a 10-year-old border collie. They have been working together for several years.

Janet started with Ohio Geese Control after retiring from a career directing a chronic condition management program that staffed and managed on-site clinics for large corporate clients. Janet has a Master of Science in Nursing degree.

Janet and Cowboy police a route that takes about five hours to complete. Cowboy’s job is to worry the geese, and bother them until they give up and go someplace else. Cowboy never hurts the geese – it is humane goose management. Janet’s job is to take Cowboy where he needs to go. Cowboy used to work five days a week – the key to controlling geese is consistent harassment. Cowboy is semi-retired now, and he and Janet only work every other weekend. Other dogs cover the route during the work-week and on the alternate weekend.

Geese wrangling is the best job Janet ever had, and she got it because of her experience as a dog foster for Cleveland APL. About 10 years ago, Janet decided to volunteer at the APL and signed up on the Cleveland APL website. She started out doing simple things like dog walking and grooming, but because of her nursing background Janet soon found herself fostering desperate cases – like very sick dogs, and itty-bitty baby kitties who needed to be bottle fed every three hours.

Janet loved the work, and her terrier, Moxie, helped out too. Janet fondly remembers one day bringing home a sick baby kitty, dirty with gunky eyes and nose. She left the kitty alone with Moxie for a few minutes and Moxie licked the kitty all over like a momma cat, cleaning it up. The kitten thrived and was quickly adopted when old enough.

Cowboy came to live with Janet’s family in December 2019. Unsure how he would respond to fosters, especially itty-bitty baby kitties, Janet temporarily stopped fostering. Cowboy is a very gentle dog, and Janet expects to be able to begin fostering again when kitten season heats up this spring. Cowboy knows how important animal rescue is. Cowboy was a rescue dog himself.

The Cleveland APL receives no government funding and depends entirely on private donations and volunteers. In 2020, more than 400 volunteers contributed more than 100,000 hours, and saved the lives of 1,896 animals. For more information and instructions on how to volunteer, go to ClevelandAPL.org.

historian, legal historian, former tax lawyer, author of Bankruptcy in an Industrial Society: The History of the Bankruptcy Court for the Northern District of Ohio (Akron University Press, 2014)