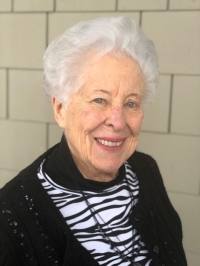 It took a global pandemic. It took the whole world slowing down last spring for Gloria Flint to retire, at age 88, after working 20+ years for the city of Westlake and decades earlier in education and government. Anyone who has visited Westlake Community Services has likely met Gloria working at the busy reception desk. Known for her quick wit, distinctive accent and impeccable style – manicured nails, elegant white hair, an iPhone and a vanity plate on her car – Gloria exudes the vitality of a woman half her age.

As her beloved accent suggests, Gloria was born in New York City – the Bronx to be exact. After marrying and moving to Long Island, Gloria completed her bachelor’s in education from Queens College. From there, she taught elementary school in New York and Houston, while raising her four children. While in Texas, she earned her master’s degree in administration & supervision at the University of Houston. She later accepted a position with Houston’s Chapter 2 program, which oversaw public funding for private schools, eventually becoming its director.

In 1996, at an age when most people are retiring, Gloria uprooted herself from Houston to start a new life in Westlake. The opportunity to join her daughter and son-in-law to help care for her granddaughter, then in grade school, was too tempting to pass up. It was a decision, Gloria says, she gladly made. “I left a wonderful job in Houston, but I wouldn’t trade a single minute I had with my granddaughter,” she shared.

Life in Westlake offered free time that she quickly filled with a part-time job at Westlake City Hall. After working in both reception and later the Engineering Department, she joined the Community Services Center – “the best job I’ve ever had,” she offered.

Life in retirement amid the pandemic has been quieter for Gloria, but she has flourished, losing 50 pounds, tackling daily jigsaw puzzles to “stay sharp” and enjoying visits with her now-grown granddaughter and new grand-puppy. With summer coming and life slowly returning to normal, don’t be surprised to find Gloria again out and about, enjoying breakfast at Claudette’s, volunteering at the new Community Services Center and staying active and happy. Well done, Gloria!

Nancy Fox is part of the Senior Transportation Team for the Westlake Community Services Department.