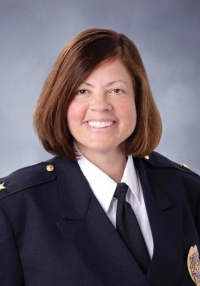 The City of Bay Village, in a statement issued the morning of April 16, announced the retirement of Police Chief Kathleen Leasure, effective May 1. The press release, which was later sent to subscribers of Mayor Paul Koomar’s email newsletter, praised Chief Leasure for her 25 years of service on the department, beginning as a police officer in 1996.

As a patrol officer, Leasure served as a field training officer, evidence technician and was a member of the Bike Patrol Unit and Dive Rescue Team. She was promoted to patrol sergeant in 2008 and detective sergeant in 2016. In June 2020, she was sworn in as the city’s first female police chief, after a contentious hiring process that rankled some members of the department.

No reason was immediately given for her retirement less than a year after her promotion.

Mayor Koomar did share words of commendation following the announcement.

“Chief Kathy Leasure served as a highly respected member of the administration,” Koomar said. “In her tenure as Police Chief she readily faced many unexpected situations that had been presented to her.  She consistently performed with the utmost professionalism, keeping her composure and commanding situations with her strong leadership ability.

“We are grateful for Chief Leasure’s dedicated 25 years of service to the City of Bay Village. Her retirement marks a final milestone in her remarkable career with the Bay Village Police Department. We wish her much enjoyment in her retirement.”

Lt. Mark Palmer will serve as officer in charge until a new police chief is named.