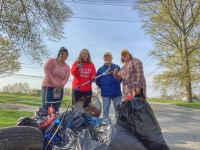 Many neighbors in the area of Forest Park and Berkeley Estates in Westlake – Michael DiLauro, Judy Fabec, Katy Boscia, Mary Step and the Strawbridges – did their part in picking up litter.

This was our first event to commemorate Earth Day 2021. As you can see, we gathered quite a pile of trash in and around our neighborhood.

Michael Angelo DiLauro earned an M.F.A. in Film Studies from Ohio University. He served as Director of the Academic Media Center and Associate Professor of Media Arts (2006-2018) and retired with Emeritus status at Robert Morris University. A celebrated director and producer of documentaries and television programs, DiLauro has earned five EMMY Awards, a Blue Ribbon from the American F.F. and the prestigious Gabriel Award for outstanding television programming. Michael has received funding from the Bill of Rights Commission, Catholic Communication Campaign, National Italian American Foundation, Pennsylvania Arts and Humanities Councils, Ohio Educational Television Network and the Public Broadcasting Service. In 2013 he received a grant through Robert Morris University from the R.K. Mellon Foundation to produce and direct “We Built This City: How the Allegheny Conference Remade Pittsburgh”. His feature documentary film, “Prisoners Among Us: Italian American Identity and WWII”, was awarded the Grand Jury Prize for Best Documentary at the New York International F.F. and Montreal F.F. DiLauro’s “La Mia Strada” an ethnic journey, was screened at the Palestrina F.F. in Italy, Atlantic City F.F. and was awarded a Silver Medal from the Media Communications Association-International F.F. “Prisoners Among Us” and “La Mia Strada” have been screened at several cultural centers and universities throughout the United States and Europe. His passion for Italian American culture and identity was recognized by the University of Pittsburgh’s “Italian American Heritage” award. Additionally, UNICO (the largest Italian American service organization) awarded Michael a “Mille Grazie” award for his cultural contribution to the Italian American community. He currently lives in Westlake, Ohio with his wife of 41 years, Janet.