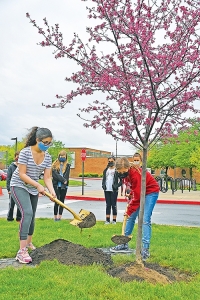 DIS students Freda Elsebaei and Ryan Brediger take their turn helping to plant a tree in front of the school. Photo by Tara Wendell

Friday, April 30, was Arbor Day at Dover Intermediate School in Westlake. Paul Quinn III, Westlake's Service Director; Stan Barnard, Westlake’s Urban Forestry Manager; and members of the Westlake Service Department were there to assist with the planting of a tree.

Several weeks prior to the ceremony, all fifth-grade students were invited to submit a poster explaining “Why trees are important to me!” Forty-five members of the class generated a poster to enter in the annual contest! The posters were then judged by Stan Barnard, Paul Quinn, Mary Beth Schneidler, Diane Morris, Ken Sadd and Justin Parks, members of the Westlake Tree Commission.

This year, because of the pandemic, students were permitted to enter a poster online or by submitting their creative ideas on poster board. Six students were selected as the winners of the contest. Ryan Brediger, Leah Navratil, Freda Elsebaei, Miles Salem, Callie Barnes and Sanika Jadhav were all presented a proclamation by Paul Quinn who was there representing Mayor Dennis Clough. Each proclamation designated a day in Westlake honoring each student and congratulated them for an outstanding poster. The students also received a ribbon for their winning posters and were told all the posters would be on display on the City of Westlake website.

The students learned the history of Arbor Day, which began in the U.S. in 1872 in Nebraska when an estimated 1 million trees were planted to promote more tree coverage in the United States. Since 1970, Arbor Day has been observed on the last Friday in April in the continental United States.

The City of Westlake provided the beautiful Prairie Fire Crabapple tree that was planted by the students at Dover Intermediate School.

The Westlake Tree Commission, which has been in existence for 30 years, works tirelessly to preserve trees in the city. They also have a great deal of input on what trees should be planted throughout the city. The commission certainly hopes that this poster contest will encourage all Westlake residents to cherish our beautiful trees!