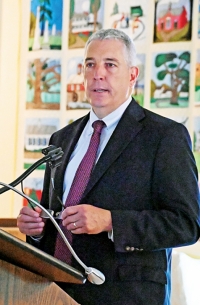 Bay Village Mayor Paul Koomar presented his annual state of the city address on May 20 at Dwyer Center. Photo by Denny Wendell

It wasn’t the best of years, but it wasn’t the worst of years, either, as Bay made it through the pandemic-marred 2020 in pretty good shape. Mayor Paul Koomar shared an overview of last year’s activity in his annual State of the City address at the Dwyer Center on May 20.

On the financial side, Bay’s income tax receipts for the year ended on budget. Income taxes, which make up more than half of the city’s general fund revenue, did drop during the pandemic, but were buoyed by a strong start.

The community services department was among the hardest hit by Covid-19 restrictions. Leslie Selig and her staff used the downtime to train their focus on underserved seniors. The department conducted a resident survey and discovered that people wanted help to stay in their homes as they age. The Aging in Place initiative was launched to connect people with resources such as snow removal, lawn care, home repair and home modification services.

The department also relied on volunteers to help provide services, with the city joining forces with community groups and clergy to make sure residents’ needs were met.

Progress continues on the “Stay in Bay” mixed-use zoning overlay that began in late 2019. The plan to modernize the city’s building code was expected to be completed in June 2020 but suffered delays due to the pandemic. The overlay has been approved with a few modifications by Planning Commission and is now in front of City Council. Mayor Koomar stated that it may be on the ballot for residents to consider this November.

Also on tap for 2021 are: completion of the Cahoon Park master plan to control erosion and allow for better access to the lakefront, rebuilding the Cahoon Park restrooms, installing additional playground equipment in Bradley Road Park, and a number of bridge and pavement capital projects.