The return of sandlot football 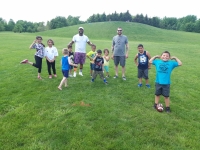 An impromptu game of "sandlot football" broke out recently at the Westlake Rec Center.

In terms of football, it was a good game but in terms of sportsmanship and fun, it was a great game. Without the players knowing it, “sandlot” ball was reborn.

I took my 7-year-old great-grandson, Stephen, to the field on the Westlake Rec Center property with a small football. As we threw it to each other, a boy or two would ask if they could play with us – of course. And then all the boys asked other boys – and girls – if they wanted to play. As the group got bigger, I retreated to a bench to watch them play.

As a father walked by with his two sons they were asked to play – they did and their dad was recruited to join too. Another dad, who was watching his son play, also joined in the fun. Each dad, now QBs for each side, then selected their players.

At one point there were about 12 kids, ages 5-7, Black, Brown, White, boys, girls divided equally as possible into two enthusiastic teams. I would have volunteered to be a ref but none was needed – there were no disputes and really no rules to break, as the young ones ran the ball, caught or dropped the ball, sometimes sharing each others’ huddles. One 5-year-old girl scored a touchdown to the delight of all the players.

An older, white-haired, rotund man watching from another bench with his wife could not resist joining the fun – on defense – for a team. His talent was loudly growling at the opposition – making both teams erupt in giggles. One play was enough for him, as he came back to his bench to use his inhaler – despite pleas from the kids to stay in the game.

Oddly, there were no parents or grandparents to be seen or to enjoy the game – maybe watching other children – also no yelling from the sidelines for the kids or the coaches or a missing ref to do better. The game ended after almost two hours when Stephen and I had to leave – taking our ball and memories with us.

Sometimes we hear when serious matters are being discussed, “This isn’t a game.” Well, maybe it should be if it could be played as these young ones played – with no prejudice of any kind, with equal opportunity to participate, with great fairness and with everyone having a good time.

We can a learn a lot from kids like this.

Mel Maurer is a retired Manager of Administrative Quality and Distribution for the Boston Weatherhead Division of Dana Corporation. During his 43 years with Dana, He held management positions in Accounting, Information Technology and Administrative Quality and Dsitribution. Mr. Maurer’s civic duties when working included being a member of the Williamson County Chamber of Commerce serving as Chairman of the Government Relations Division and serving as host of the Chamber’s Public Affairs Roundtable. He was also member of the Brentwood Chamber of Commerce - Government Affairs Committee and a member of the U.S. Chamber’s Public Affairs Committee. He also served as a member of the Williamson County Economic Development Showcase Committee, a member of the Tennessee Association Of Business Public Affairs Committee; a member of the Policy Board of Directors for INROADS/NASHVILLE INC. and a member of the Board of Directors of the Williamson County Heart Association. He wrote columns on government affairs for the Chamber Newsletter and the Nashville Multiple Sclerosis Association. He chaired the Williamson County Toys For Tots (T4T) Campaign and chaired the Government Relations Committee of the Middle Tennessee MS Society. In his retirement, he is a member of the Government Relations committee of the Buckeye Chapter of the MS Society and a 2007 enductee into the National MS Society’s Volunteer Hall of Fame and was selected as one of the “Faces of Westlake” in 2007. He is past president of the Cleveland Civil War Roundtable, now its Historian, and past president of the Philosophical Club of Cleveland and a member of the Titanic Historic Society. He is the 2009 Charirman of Westlake’s Charter Review Committee. He also writes articles for various organizations and speaks on a variety of topics. He has had more than 500 “Letters to Editors” printed in a number of newspapers and magazines including: Time, Readers Digest, USA Today, The Plain Dealer, The Sun Press, The Nashville Tennessean, The New Republic and others. He is also a published poet. He has hosted over 50 hours of TV shows broadcast on on cable in Cleveland and other cities in Northeast Ohio and has appeared in two plays presented by the Civil War Roundtable and one at the Huntington Playhouse. Mr. Maurer received a Bachelor of Science degree from John Carroll University in Cleveland, Ohio. He and his wife, Elaine, live in Westlake, Ohio. They have four children, eight grandchildren and one great granddaughter. His interests include writing and speaking on community affairs, charitable causes, history, political issues and personal experiences.