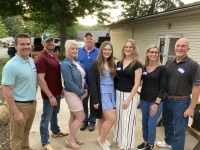 The scholarships are awarded based on need, character, scholastic achievement and leadership qualities.

Buehler will be attending Kent State University studying nursing (her father passed away from lymphoma when she was 10 which motivated her to become a nurse). She was editor in chief of The Bay Tribune, class officer, member of the National Honor Society, YPF, swim and volleyball teams. She works at Arrabiata's and as a lifeguard at Bay Family Aquatic Center.

Fischer will also be attending Kent State University studying architecture. She was president of Student Council, class officer, a Rockette, a member of YPF, yearbook staff and the National Honor Society. She also swam for the swim team. She volunteers at Feeding Souls, St. Raphael's fish fries, Snow Angels, Homeless Stand Down, Adopt-a-Family, and founded Bay Gives Back. She also received A+ Award on Ideastream.

Wunder will be attending Bowling Green State University studying psychology. He played soccer and lacrosse, was in the marching, concert and symphonic bands, is a member of the National Honor Society, and works at Five Guys. His father is in the Coast Guard and was transferred to Virginia before Levi's senior year, but he opted to stay in Bay Village and graduate with his friends while his parents and three siblings moved.

“The accomplishments of these three recipients, both academically and in other fields, is quite impressive,” scholarship committee chairperson Peter Gierosky said. “We are happy to provide this seed money for our leaders of tomorrow.”