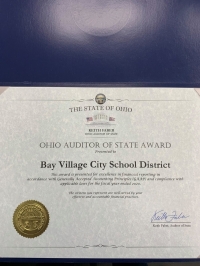 Bay Village Schools has won the Auditor of State award six of the last seven years.

The State Auditor’s office shares information as far back as 2014, and Bay Village Schools has received the Ohio Auditor of State Award every year since 2014, except for 2017, so six of the last seven years.

“We are elated to share this wonderful news with our stakeholders, as it takes an entire district to win an award like this,” said Meghan Rohde, Treasurer for Bay Village Schools. “We strive to provide the best financial reporting to our local and state communities.”

The Auditor’s office presents the Auditor of State Award to local governments and school districts upon the completion of a financial audit. Entities that receive the award meet the following criteria of a “clean” audit report: