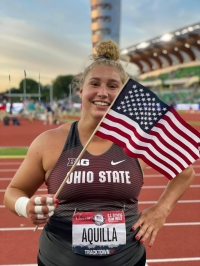 The City of Westlake presented a proclamation honoring local Olympian Adelaide Aquilla during the July 15 City Council meeting. Adelaide, who was in quarantine in advance of the Tokyo Games, competed in the Olympic shot put competition.

Her proud father, Jared Aquilla, who welded his daughter a squat rack to help with her training, accepted the proclamation on her behalf.

Adelaide finished 20th in the qualifiers in Tokyo on July 30, coming up short of making the Olympic finals. She will return to Ohio State University for her additional year of eligibility.