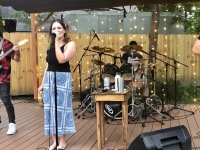 During a month where the radar was not to be trusted, when the sun shone when the radar said "rain" and it rained when clear skies were promised, the shows went on.

When a beautiful sunny Thursday Market led to the first-ever westside performance by Groundworks Dance Theatre being curtailed by pounding rain, the audience and dancers quickly adapted. With the side walls of the Fuller House open and the audience cross-legged on the floor or tucked onto benches, a breathtaking performance by the innovative dance group was a night to remember.

Actually, two nights to remember – it rained the second night of the performance as well. But in the end, when the appreciative audience lingered to engage with the dancers before they waded in ankle-deep puddles to their cars, one dancer commented, "This felt very special, intimate and collaborative with the audience."

A week later, Cleveland Shakespeare Festival performed "Romeo and Juliet" before a record-breaking audience with not a cloud in site. Borrowing from our Shakespeare friends, all's well that ends well.

Two of BAYarts' fan favorites that were rained out – performances by School of Rock and Portersharks – have been rescheduled: School of Rock will perform Thursday, Aug. 5, following the market with – appropriately – Smokin' Rock 'n' Roll Food Truck. Portersharks will return at a special time: 5-7 p.m. on Sept. 19 for what band member Brendan Carr noted is the half-way point between St. Patrick's Days.

Still to come: BAYarts Thursday Market until Sept. 9 with live music on the gazebo, dozens of vendors and food trucks. Free Sunday concerts still to come include a double bill with Moko Bovo and Maura Rogers & the Bellows (Aug. 8), Kingfish (Aug. 15) and OMF (Aug. 22). Moondance returns Sept. 11: rain, shine, sleet or snow, the party always goes on. Visit www.bayarts.net for details on these events.