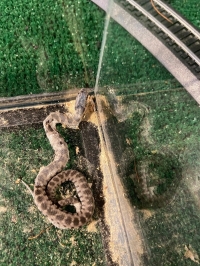 The fifth snake Kevin found was molting, or shedding its old skin. Photo by Kevin Davey.

This is the first in a four-part series detailing the crazy adventures of a Bay Village homeowner faced with a serpentine crisis.

Imagine one day encountering your worst nightmare – one that makes your skin crawl and your body shudder. Then multiply that nightmare a whole bunch of times, and stick it in the creepiest part of your house – the basement. Could you handle it?

Well, my lovely wife, Amy, had to do just that. On Aug. 31, she encountered two 7-inch-long snakes (think very long, skinny pencils) in our Bay Village basement. These snakes were identified by wildlife biologists as Northern Water Snakes, probably recently born.

The following day, I found two more in the basement, bringing the total to four. One was gracious enough to show us his "school picture day smile." I call him "Bitey."

The day after that, I found another one, bringing the total to five (yes, FIVE snakes. All alive. In my basement. Over three different days. UGH!). The latest snake was still molting, so he is probably a week old at most. (By the way, don't tell Amy this, but these snakes apparently give live birth to 30 or more snakes – no eggs for these bad boys.)

So, after consulting with various experts, who suggested moving out of the house, selling the house, and/or burning down the house (not in that order), a pest expert suggested I place flour on the basement floor to at least track the movements of any new snakes (up to this point they have all been in one specific area – oh Lord how I hope that remains true!).

We will see how this works out – will we see slithery snake paths in the flour? Will I find the source of the snake factory? Will Amy and the kids move out? Will Kevin be committed to a snake-free mental hospital? Check the Oct. 5 issue for our next episode!