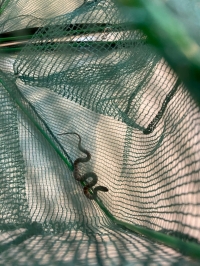 This is the third in a multi-part series detailing the crazy adventures of a Bay Village homeowner faced with a serpentine crisis.

Previously on “Bay Village snake hunters: Basement Edition," I had captured six baby Northern Water Snakes in my basement over the course of several days.

That total is now seven snakes, and I'll get to that in a bit. Hopefully, for my family's mental health, this is the series finale.

First, I'd like to back up a bit, because most new readers (scratch that, probably ALL readers) are probably wondering at this point: “How did this mouth-breathing village idiot allow seven snakes in his house in less than a week?"

I know I'd be asking that question, but in my defense, the whole situation just sort of slithered up on me (blatant attempt at snake humor).

I guess my attitude toward all this can be summed up in the initial snake encounter on Aug. 31:

A good husband would have flown down the stairs to the basement after scream #1, definitely by scream #5. I guess I'm kind of lame that way.

Anyway, I think I made up for it by catching many, many snakes, and even touching a few with my bare hands (I am a city boy, for sure)!

After seeing snake tracks in the flour and finding #6 (my kids and I stopped naming them after "Bitey" – #4, or was that #3?), I waited until late in the day to re-dust the floor with flour, and plug some possible access points.

I decided to check the minnow trap I had baited with snake food and guess what? I caught one in the trap! The trap actually worked (that is a good thing, right?). Apparently, the smell of cooked salmon was too much to resist. Snake #7 was the biggest one yet, though, which scared me. Time for drastic measures!

I started guessing (seriously? Like I haven't been guessing all along?) that these snakes were coming up from the sump pump, or from a grated floor drain. So, I covered the drain completely (and put a big rock on top for good measure), and I sealed all the openings around the sump pump pipes. Sprinkled lots of flour over both.

My working theory is the sewer drain or sump pump was the point of entry, and mama snake was never in the basement, but the babies found their way out of those pipes and into my basement.

This latest theory is a bit disconcerting, because I've lived most of my adult life with sump pumps and basement drains, never imagining that snakes could actually emerge from them to wreak havoc! My new life rule is snakes could slither out from anywhere I can stick a pencil. That turns out to be a pretty disturbing rule. Not good.

If another snake gets in now, all my theories are shot to heck, and I go to the backup plan (lots of fire). I kind of hope that wraps things up, but I am keeping the flour on the floor for another week (partly because I have not figured out how to vacuum it up without it blowing all over the basement).

And of course, all snakes involved in this drama have been safely released – closer to your house than you probably would like.

Tune in next issue for the dramatic conclusion of this epic saga, when mama snake makes her cameo.