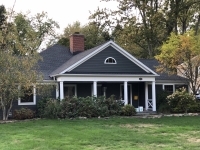 According to “Bay Village: A Way of Life” William Krumwiede, his wife, Sophia, and daughter, Mary, left Hanover, Germany, to sail for America in 1847. They came directly to Cleveland because they had friends here. William was a carpenter and went to work as a ship’s carpenter until he could save money to purchase a farm on Walker Road in Dover Township. He built a house in the 1860s and it has been added to three times. The house still stands, along with a barn, both with colorful paint jobs at 31611 Walker Road, just east of Walker Road Park.

William and Sophie had one son, Louie. He stayed on to work the farm after his father died. He married Kate Quell of Cleveland in 1888 and raised four children. After Kate died, William remarried and had an additional son.

The Krumwiede brothers, William H. and Arthur E., became carpenters and builders just like their grandfather. Arthur also served as a councilman in Bay in the 1920s and a piece of firefighting equipment was stored at his home on Foote Road at that time. He later moved to Lake Road in Avon Lake.

Nantucket Row and Winston Drive have fine examples of their work, constructed on portions of the Meilander and Aldrich farms in the 1950s and 1960s. Other examples can be found on Bradley Road, West Oviatt, and even Ellington Road in Westlake. I and my wife Deb own the one on Ellington!

We purchased it in 2012 from the original owners, Jack and Betty Keeler, who had it designed and built by the Krumwiedes in 1952 and had them add on to it for them in 1962. They raised three children in the house and there is an amazing model train set-up in the basement and crawl space. It is a 2,500-square-foot Cape Cod with three bedrooms and a bath and a half on the first floor and two bedrooms and a full bath on the second. A family room, combination living and dining room, kitchen and laundry complete the first floor. A perfect arrangement for our household which consists of my mother-in-law, my wife and myself. Plenty of extra rooms for separate offices for my wife and I and even a playroom for the grandkids.

The Keelers were proud of their original dishwasher and a streamlined “Dishmatic” mounted over the sink for pre-washing which mystified the plumbers who came to work on the house. The Keelers clearly loved the house and so have we. The Krumwiedes hired architects who designed very livable houses with on-site carpenters who built extra touches which give it loads of extra charm.

Dover Bay was a subdivision laid out in the 1920s, built out in the 1940s and 1950s. The builders took care in preserving as many trees as possible. Mr. Keeler apologized to me that he had to remove a large tree to build the house.

We love our home and neighborhood and I have this gig too, the Digging Dover column which draws on my knowledge from living in Bay Village for 17 years and serving on the Bay Planning Commission and in various capacities for the Bay Village and Westlake Historical Societies, and my 32 years working for the Westlake Planning Department and eight years residing in Westlake.

Then our youngest daughter and her husband had their third child in six years. They live in Chesterland. Boom, everything changes! We need to move, so our Krumwiede house at 27333 Ellington Road is going on the market. We need to be 10 minutes from these grandkids.

Maybe this is my last chance to actually own a historic house? Alas, we found a ranch just 10 minutes away from them in Gates Mills, which meets our household needs perfectly. White, with black shutters, brick base, the Gates Mills “look.” It was built in 1957, the same year I was born. If I live to be 100 and age in place, I will finally have my century home!