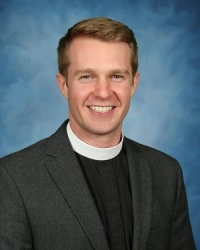 St. Barnabas Episcopal Church in Bay Village announced this week that its current Priest-in-Charge, the Rev. Alexander D. Martin, has accepted a call to serve as Rector – a tenured position. The church plans a celebration of his new role and the tenth anniversary of the church re-opening on Nov. 21.

“After extensive discernment, the vestry was thrilled to call Fr. Alex to be our Rector. In the last three years, he has led us to significant growth, guided us through the chaos of 2020, and been an excellent spiritual leader for our growing parish,” said Maryann Kuzila, Senior Warden of the St. Barnabas Vestry, an elected leadership team.

Fr. Alex has established the core building blocks to help St. Barnabas move from being a smaller, pastor-led church, to a larger, program-led church. For example, he has created the structure and identified leaders of various committees that provide consistent programming, from Spiritual Formation to Care to Hospitality. He has also expanded the staff to include a Youth and Children Director and a Communications Director. Our Sunday School attendance, in particular, has grown substantially.

He has also established initiatives to preserve the long-term health of the church, including an endowment fund, while increasing our local support of those in need through partnerships with the Episcopal Church of the Redeemer in Lorain and St. Luke’s Episcopal Church in Cleveland. He has also overseen a transformation of our building and grounds, resolving key structural issues, remodeling Parkside Hall, upgrading to a commercial-grade kitchen, and renovating the pipe organ.

He is also an elected member of the Standing Committee of the Diocese of Ohio, one of the governing bodies that serves as the Bishop’s Council of Advice.

“Accepting the call to serve as Rector of St. Barnabas was an easy decision. I love this church and this town, and am so excited to be a part of what God is doing with our community in Bay Village. I truly believe that what we offer people – a place where ancient worship, modern thinking, and radical inclusion are part of everything we do – is exactly what the west side of Cleveland needs right now,” said Fr. Alex Martin.

Prior to St. Barnabas, he was the Associate Priest at St. Timothy's Episcopal Church in Anderson Township, Ohio (suburban Cincinnati) of the Southern Diocese of Ohio. He has a Bachelor of Arts in History from The Ohio State University (where he played the marching band and dotted the “i” in Script Ohio) and a Master of Divinity from The General Theological Seminary of the Episcopal Church in New York City, where he serves as a member of the Alumni Executive Committee. A native of Jefferson (Ashtabula County), he lives in Bay Village with his husband, Rob, and church dog, Maggie.

I am the Office and Communications director for St. Barnabas Episcopal Church.