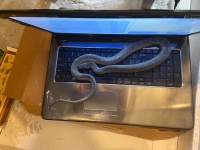 Mom snake was found curled up in the warmest spot in the basement – on the laptop with the web cam software! Photo by Kevin Davey

This is the final installment in a multi-part series detailing the crazy adventures of a Bay Village homeowner faced with a serpentine crisis.

Just when you thought it was safe to go back down to the basement, I present the latest installment of "Bay Village snake hunters: Basement edition." I am titling this episode "Mom." (Cue ominous music.)

First, just to recap, from Aug. 31 to Sep. 6, my wife Amy first discovered, and I eventually captured, seven baby Northern Water Snakes (each about 7-8 inches long, thick as a pencil), squirming around in our basement. Never more than two in a day. I'd be remiss not to point out that the mom snake typically gives live birth to 30 to 90 snakes. I found only seven (uh oh). Plus, the mom typically bolts right after giving birth, leaving baby snakes to fend for themselves. This was reassuring, in a weird way.  I did not want to meet mama snake – she could be 2 to 4+ feet long!

As you can tell, I have learned WAY too much about this particular snake species!

At the end of those 6 or 7 skin-crawling days, I dusted flour on the basement floor (used to track remaining snake movements) and then left it there for a week, until I figured out how to clean up about 1.5 pounds of flour without making a huge mess. Eventually I settled on having a shop vac outside the basement with a suction hose coming through a window. That way I would avoid flour blowing all over the basement from the vacuum exhaust.

The cleanup worked out great, but before I started I noticed some of the flour had what looked like "s" tracks in it. I thought maybe it was my mind playing tricks on me – seeing imaginary track marks that were not there – or maybe it was our dog who did it. I did not want, under any circumstances, to believe there were still snakes living in our basement two weeks after the first ones were captured. "Ignorance is bliss" comes to mind. I went with that thought.

In any event, I kept quiet and did not tell Amy my suspicions. You know the saying "happy wife, happy life?" It definitely holds true here.

Since I was still unsure about some possible leftover baby snakes in our basement, I decided to sprinkle another 4 cups of flour on the floor. Every day, I'd diligently go down and check for tracks. Every day things looked great – until Sept. 20. What did I find? More "s" tracks. I could not talk myself out of ignoring these tracks. There was still at least one snake in our basement. Alive. And probably still thriving, after almost a month living down there.

I had to tell Amy this. Of course, she freaked, so I freaked. I was in big trouble. Time to seriously ramp up my snake hunting game.

I got an old laptop that had motion detecting webcam software on it. (As a side note, this is a great thing to try with your kids – set up a motion detecting camera pointed out a window, put some food outside, and see if animals come overnight to eat it. When we lived in Westlake, in just one night we had a raccoon, a possum and a skunk all caught on camera. My kids thought it was awesome, especially when the possum and skunk almost got into a fight.)

I got some LED studio photography lights, and set up the laptop on the basement floor. It looked like a little movie set. Now we just needed our star or stars to appear.

I woke up on Sept. 20, and there were motion-detected photos taken during the night. Maybe something was down there! Alas, most of the 14 "motion events" were false alarms. But there were three photos, each 1 second apart, with a mystery creature (which sort of looked snake-like). Then it vanished.

As my youngest son said, "Dad, that looks like a BIG snake."

So I got my gloves, went down in the basement (up until now I was reviewing all these photos from the sanctity of my second-floor office – thank you remote desktop software!) and I started searching.

I did not have to look long.

Remember how in earlier episodes I mentioned how the snakes seemed lethargic? Our basement is under the original 1940s-era part of the house, and the heating/cooling ducts leak a lot. The basement is very cold in summer, very warm in winter. And snakes like warmth. Thankfully, in cold they are slow and they search for warm spots.

So, guess where I found the snake? Right on the nice warm laptop keyboard! A pretty smart snake, if I do say so myself – it found the warmest spot down there. This is a 17-inch laptop, and by my crude measurements the snake was about 34 inches long – almost 3 freakin' feet! This had to be the MOM snake! I yelped with joy, fear, disgust and jubilation.

Now I had to catch it and get it OUT OF MY LIFE. I knew this mom snake would be fast – it was nice and warm from the laptop – and I was scared. The baby snakes were cute, thin and little. This snake was big, thick, long and not so cute. If I screwed this up and mom got away, I'd have no plausible defense in divorce court. I'd be forever branded as a bad husband, bad father, and – worst of all – a bad snake catcher.

Once I got my courage up (I normally do not drink at 6 a.m. on a weekday, but there I was), I jostled the laptop a bit, and mom did not budge. The keyboard was just too warm and inviting. So I made my move. I quickly picked up the laptop, tipped it over a storage container, and mom slid in. Luckily I covered the container before she climbed out, because she was angry. And moving very fast.

With mama snake safely in the covered container, I gave her some water and some bugs, and after school my kids and I released her in Cahoon Creek, where she belongs. Heck, maybe she will reunite with her kids, and they can laugh and reminisce about the time they lived almost a month in some poor schmuck's basement.

As for me, Amy and the family, the motion camera is staying for a little while. Probably for like 6 or 7 years, just to make sure all snakes are gone. I've told everyone to expect baby snake carcasses, too. We have some basement cleaning in our future and it could get ugly.

To (hopefully) wrap this all up, if you are driving around Bay sometime in the middle of the night, and you see very bright lights coming from a basement, you may be witness to the filming of another episode of "BVSH: Basement Edition." But honestly, I hope not. I am about done with snake adventures!