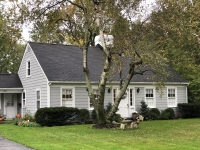 First, let’s set the record straight. In the last issue a caption of a photograph in the “Some Krumwiede homes” article stated that Winston Road is in Westlake – it actually is in Bay Village. The book “Bay Village: A Way of Life” states that Arthur and his brother William Henry Krumwiede were both house carpenters. A perusal of U.S. Census records does not support that assertion.

Yes, Arthur was a carpenter like his grandfather, as was Arthur’s son Robert and his son Lawrence too. However, Arthur’s brother William was a mail carrier and bus driver and his half-brother Kenneth Krumwiede was a farmer like their father, Louis. According to naturalization records Arthur’s grandfather William immigrated in 1849 not 1847, and according to tax records, 31611 Walker Road was constructed no earlier than 1869 when William Sr. first purchased the 15-acre farm.

By 1910 the 15-acre farm and 31611 Walker Road house passed on to their son Louis and this is where Arthur and William Henry grew up and labored on the family farm. By 1920 Arthur is a house carpenter living with his wife’s family on Foote Road and William Henry is a 26-year-old single, Rural Free Delivery mail carrier living at home with his parents.

In 1925 the easterly four acres of the 15-acre farm is transferred to William Henry and his wife, Amie, who he married in 1920 after the U.S. Census was compiled. By 1930 the four acres is no longer theirs and by 1931 the westerly 11 acres are no longer Louis’s. In 1940, 72-year-old Louis and his second wife, 60-year-old Nellie, are living with their son Kenneth on a farm in Erie County, Ohio.

By 1930 Arthur is a house builder living in a house he rented on Foote Road. By 1940 he is the proprietor of a house building company with his 22-year-old son Robert working as a carpenter apprentice and 17-year-old son Lawrence still in high school. Arthur had begun buying lots and building homes on Winston Road in the late 1930s. He was poised and ready to begin building on Nantucket Row in 1949 after that subdivision was platted. A 1951 city directory for Lakewood lists Arthur’s son Lawrence working as a carpenter.

It was in 1952 when the Keelers had Arthur Krumwiede design and build them their house at 27333 Ellington Road in Westlake. He was excellent at promotion. I have a copy of his 50-page sales brochure which was published in 1955.

In it he states: “There is an old saying to the effect that when love and skill are combined, one can expect a masterpiece. Owners of … homes designed and constructed by Arthur E. Krumwiede will agree that in their case, this adage has become a reality.” He continues: “Eight Krumwiede homes have been featured over the past few years in Better Homes & Garden and The American Home. … He has been twice chosen by the Builder’s Exchange of Cleveland to construct an ‘Idea’ House of the Year. His homes have been used to illustrate nationally distributed advertising prices on home materials. … Mr. Krumwiede’s rapidly increasing stature is perhaps best illustrated by still another fact. Prospective builders, having seen his homes in national publications, often drive hundreds of miles to the site of the original. To these, families seeking authenticity, character and integrity in a home, the search is fully justified.”

The brochure states that Mr. Krumwiede did years of research and took many trips to the East Coast in his hunt for authenticity of line and detail. It is true that, except for their typical suburban setting on a curvilinear street, many of Krumwiede’s original house designs on Nantucket Row are difficult to distinguish from the traditional New England house designs that he duplicated. He is really the Cleveland area's version of Royal Barry Wills who was a successful architect and builder on the East Coast during the post-WWII housing boom, whose firm is still designing and building high-end traditional style homes.

As for those magazine articles in national publications, several of the accompanying photographs can be found in the Cuyahoga County Archives stapled to copies of the building permits. It was a real treat to see several of the Nantucket Row homes when new and freshly painted in their original color schemes.