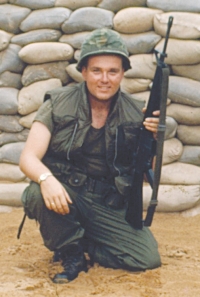 Tony Dostal outside his barracks in Da Nang, Vietnam.

This is the first in a series of articles about one local veteran, Bay Village resident Anton (Tony) Dostal, who served as a mortician during the Vietnam War.

Not many kids grow up dreaming of becoming a mortician. For Tony Dostal, the journey of his life's work began as a student at John Adams High School in Cleveland.

“It started out as a joke," Tony said. "When I was a teenager, a teacher of mine lined me up with a funeral home for summer work. It involved doing the odds and ends at the funeral home, like chasing doctors to get signed death certificates and being a greeter at the funeral home, while making a dollar an hour."

After high school, Tony entered Kent State in 1963, majoring in sociology. After graduation, his experience in the funeral business led him to attend the Pittsburgh Institute of Mortuary Science, to learn the art of embalming.

After earning his Bachelor of Science degree from the Institute, Tony began working at the Golubski Funeral Home in Parma.

One Saturday in the late spring of 1966 while working there, he met his future wife, Judy.

“She was there with her family for the wake of her grandfather," Tony recalled. "I was greeting people at the parlor. When I looked to my right I saw Judy walking down the hall to the door and I thought I should open the door for her. We started talking and she said she had a date that night, but I asked if I could call her the next day, on Sunday. She said yes, and the rest is history. I think it was on our third date that we decided we were going to get married. I gave her an engagement ring at the East 9th Street pier, and we married on Nov. 5, 1966.”

It was the end of September 1967 when Tony came home from his latest job at the Corrigan Funeral Home on the west side. As he walked in the door, Judy told him that he had received a questionnaire from the Selective Service. “I picked the envelope up and I said, ‘This isn't a questionnaire, it's the greetings from the draft board.’” Tony had been drafted into the U.S. Army.

“I went in the service a few days after our first year anniversary,” he said. Tony reported for induction at the federal building in downtown Cleveland at 5:45 a.m. on Nov. 8, 1967. “I looked to the east and the sun was coming up, and I thought, ‘What the hell am I doing here?’”

And so began Tony Dostal’s service to our country.

He reported to Fort Knox for basic training. Then it was on to Fort Bragg, as part of the 82nd Airborne Division.

“There were half a dozen other guys that had a mortuary background there. I'm unpacking in the barracks when a runner for the first sergeant comes in and says, 'The sergeant wants to see you.' The sergeant says, 'You can type and you’ve got office experience, I want you to be the company clerk.'"

That was OK with Tony because it meant skipping the chore of "KP," or kitchen patrol.

“I was able to come home in June for a week, during which Bobby Kennedy was assassinated,” Tony remembered.

While at home, Tony received a call from headquarters to come back to base because he was going be transferred to Fort Lee, outside of Richmond, Virginia, to learn the procedures for remains identification. Preservation of remains was accomplished using the most modern techniques and equipment in embalming. In 1968, the captain from the mortuary in Da Nang, Vietnam, put out a call during the Tet Offensive that he needed 20 morticians because of the rise in soldier deaths.

Before Tony was detached to Vietnam, he was given a three-week leave to go home and see his wife, Judy. Tony departed the U.S from Dover Air Force Base in Delaware. His flight followed the sun to Anchorage, then on to Japan before arriving at the U.S Air Force base in Da Nang on Aug. 30, 1968.

In the next issue, the series will follow Tony's experience "in country" as he serves in Vietnam.