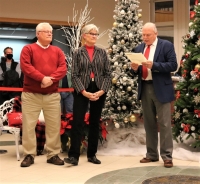 Westlake Mayor Dennis M. Clough honors Mike and Susan Pandoli for their contributions to the community, which earned them the title of Mr. & Mrs. Westlake 2022.

Music and the aroma of hot cocoa was in the air as attendees gathered to celebrate the crowning of Mr. & Mrs. Westlake 2022 during the city’s annual Tree Lighting Ceremony on Sunday, Dec. 5, at Westlake City Hall.

Westlake Mayor Dennis Clough introduced the honorees – Mike and Susan Pandoli – and detailed the numerous ways they have served the interests of the community, particularly its youths. They were nominated by John Sobolewski of the Westshore Chamber of Commerce and The Power of MORE and selected by the Westlake Town Criers in recognition of their hard work and selfless dedication to serving the interests of the youth and others throughout the community.

The Pandolis moved to Westlake in 1977 and immediately became active in the community. Mike spearheaded an effort to convert Meadow Lane Estates to gas the minute it became available following the gas shortage of the late-1970s.

Because their children attended both private and public schools, Mike and Susan had their hands in both worlds. Susan served as a PTA board member for multiple schools as their four children progressed in their education in both public and private schools, including elementary school, middle school, high school and became a member of the Westlake Council of PTAs. Her consistent dedication has earned her a PTA Lifetime Member Award. If that were not enough, she also was the founding president of the St. Bernadette Parent Group and served on the St. Bernadette Parish.

Susan’s contributions went beyond leadership roles. She volunteered as a room mother, dance chaperone, went on field trips and made classroom presentations to enhance the curriculum. Mike and Susan both volunteered at various fundraising events, such as “Thursday Night Bingo” and other fundraisers.

Mike joined the Westlake Town Criers in 1984 and has been an active member for 37 years. He served as president for two consecutive years and held other board positions and was presented the Lifetime Achievement Award in 2019. Mike remains active in the Town Criers, raising funds, sharing his knowledge and experience and participating in a variety of community service activities.

Music for the event was provided by the Westlake Chamber Orchestra, made up of string players from Westlake High School. As a “thank you,” the Westlake Town Criers presented a donation check to the ensemble prior to the start of the ceremony.

Anyone wishing to nominate candidates for consideration to be crowned the next Mr. & Mrs. Westlake should contact the Westlake Town Criers at to info@westlaketowncriers.com or Westlake Town Criers, P.O. Box 45224, Westlake, OH 44145. Submissions should include a list of activities and organizations in which the nominees have been active, offices held, events sponsored and any other information about how they have given back to the community.