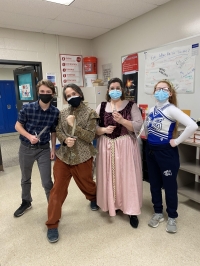 “A glooming peace this morning with it brings … for never was there a story of more woe, than this of Juliet and her Romeo!” boomed the Prince of Verona to assembled citizens gathered around, many of whom lay slain on the ground, thus ending the beautiful and tragic story of two star-crossed lovers. After a brief pause, the room erupted into laughter and applause, perished characters rising to their feet to grab their backpacks as the bell rang and the Prince of Verona (Marie Hunt, 9th grade) rushed off to get ready to cheer at the season’s first home basketball game.

The performers this day were freshman English students at Bay High who had just ended a week of collaboration, education, and performance with a pair of actor-educators from Great Lakes Theater, the renowned local classic company. The relationship between BHS and Great Lakes has been a wonderful tradition that was, like so many others, halted during Covid-19 protocols. This school year the actors are back in the building, masked (of course) but excited to work with students in person again.

"It has been such a thrill for the Great Lakes Theater school residency program to reconnect, in person, with schools like Bay High. The program celebrates its 40th anniversary this school year, and there are schools like Bay with which we have a long history, and we greatly appreciate working together to best facilitate our lesson plans in an environment that is safe for young students and our actors,” says David Hansen, the group’s Education and Outreach Director. Hansen is also a graduate of Bay High, which brings an additional layer of warmth to the relationship between the school and the Great Lakes acting troupe.

(Fun fact: Tom Hanks, Olympia Dukakis, and Cloris Leachman are all alumni of Great Lakes, which is currently housed at the Hanna Theater.)

The actor-educators typically spend a full week in the building, moving between their assigned English classes to conduct discussions with students, rehearse scenes, lead improv games, and demonstrate the basics of stage combat (a student favorite). This fall, in addition to "Romeo and Juliet," the actors helped juniors navigate the dark terrain of "Death of a Salesman" and performed alongside seniors on the capstone of their high school Shakespeare study, "Hamlet."

Phil Slanina, who teaches Senior English and coordinates the Great Lakes Theater visits each semester, says: “Our partnership with the Great Lakes Theater Education Department is amazing. Being able to bring in actor-teachers to the classroom is invaluable because the students are able to examine the play through the eyes of an actor and consider choices that a stage-actor would make while preparing for a role.”

Great Lakes Theater has completed its fall visit to Bay High but will return in the spring to inspire a new group of students to love drama, classic theater, and sword fighting. The students enjoy the actors tremendously and the actors have enjoyed watching student attitudes evolve over time.

Tim Keo, a veteran actor with the company, noticed that students have changed in their approach to his coaching over the years. “Having worked with students at Bay High for 18 seasons now, I am always struck by how student attitudes have changed towards each other over the last two decades. To me, students have become more compassionate as well as supportive of each other in their willingness to try anything and their openness to each other’s ideas.”

Heather Fanter is an English teacher at Bay High School.