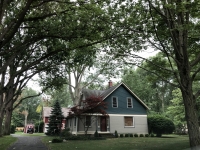 Wirt and Clifton were next door neighbors on the south side of Osborn Road in the early 1900s. Both owned approximately 20-acre parcels which extended south from Osborn Road to the railroad tracks. Wirt and his wife, Elvie, had purchased their parcel from the estate of David Osborn in 1904 and constructed the subject home and barn that year. They are simple vernacular gabled structures.

Wirt and Clifton formed the Dodd Aldrich Realty Co. which developed an approximately 50-acre subdivision east of Dodd’s property called Forest Park, in the 1920s. They built many handsome homes on or near Osborn Road but the Great Depression led to their retirement as developers. Houses attributed to the carpentry skills of Wirt Dodd include 28210, 28327 and 28505 Osborn Road.

The book “Bay Village: A Way of Life” has lots of information about Wirt and Elvie Dodd and their families, some of which is excerpted below.

It was April 1868 when Charles and Annie Dodd with their three oldest children left Peel, Isle of Man, to migrate to America. They came to northeast Ohio because friends and relatives were already here.

Wirt Wallace Dodd was born to them in 1868 on Little Mountain in Concord Township south of Painesville. The family moved to Warrensville in 1869 and then to Avon. The 1870 U.S. Census has the Dodds living in Avon in June of that year.

A traveling tailor overheard when making clothes for the Osborns that they needed help on their fishing boats, he told the Dodds. Charles went to work as a fisherman for Sherman Osborn and the family moved to Dover.

Wirt Dodd, reminiscing of when he lived at the Sherman Osborn house on Lake Road in 1872, recalled hearing the schoolchildren chanting “Grant for President” in the nearby schoolhouse. Wirt’s younger brother Ashton was born in Dover in 1874.

There is a picture of the family standing in front of the Saddler twine house which they most likely later occupied. It was a very humble structure at the time of the picture, probably built for storing twine used in making fish nets. The 1880 Census has Wirt’s father listed as a farmer with their nearest neighbors as David Sites and William Aldrich which would place them on Bassett Road.

Al Osborn bought the twine house from the Saddlers for $100 and moved it from Lake Road to Bassett Road. This was probably around 1896 when the Interurban was constructed where Electric Drive is now. The twine house, converted to a snug single-family home, still stands at 335 Bassett Road.

Wirt married Elvie Powell Stevens in 1900. It was her second marriage; on the marriage record he is listed as a carpenter, she a dressmaker. They had two children, Charles Perry and Sarah Eleanor. Ashton married Clara Brooks and had one son, they lived at 30513 Link Road (now called “Ashton Lane”). He was a carpenter and worked with Wirt.

The Wirt Dodd family were members of the Bay Methodist church and in 1909 Wirt was hired as contractor for their new brick sanctuary. The 1910 Census finds the family living on Osborn Road. Members of the household include Elvie’s father and a servant. Wirt’s occupations is listed as farmer.

In 1916 W. Dodd was an officer in the administration of the new mayor Jesse L. Saddler. In 1917 Elvie was one of five women present at the first meeting of the Bay Village Women’s Club. The barn at 600 Bradley Road (now a home) was built by Wirt in 1918.

In the 1920 Census Wirt’s occupation is listed as fruit farmer, in 1930 Census, a builder. Daughter Sara is 21 and living at home with her parents at the subject property. She married later that year. Tragically her husband died in 1932 several months before their daughter Patricia’s birth.

Wirt was living with son Charles and his family during the 1940 Census. Elvie with daughter Sara and granddaughter Patricia. Wirt and Elvie sold the subject property to Charles in 1942.