Does Westlake have a structure from 1803? 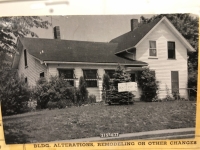 We were asked to prepare a list of Westlake’s oldest structures in 2011 for Westlake’s bicentennial. When using available databases prepared by a firm that specialized in that type of information back then, we were surprised to see that the oldest structure on the list was supposedly built in 1803! Could it be true?

The structure in question is located at 27060 Center Ridge Road. It is a modest vernacular gable-wing farmhouse currently located on a rise between Dover Creek and “The Rusty Barrel” bar. From the outside it didn’t look like it could be that old but the then-owner Dominic Chillemi (since deceased) shared that the basement joists were logs that still had bark on them. This indicates that most likely the structure predates the close of the Civil War.

After the Civil War, milled lumber dropped in price because it could be shipped by railroad. Prior to this time locally sourced lumber was relatively expensive and if a builder could save some money using un-milled logs as joists it was something that was often done. The year 1803 is a long way from 1865 though.

In 1803 the Western Reserve west of the Cuyahoga River still had not been surveyed. The house looked nothing like a French trader’s outpost or cabin that could possibly pre-date the survey. All other sources give 1810 as the year the first non-Native Americans settled in Dover – the Cahoons and the Porters – and they each built log cabins along Lake Erie.

The fact that our subject house was on a rise next to a source of water suggested that it could be early because these are characteristics which the settlers favored for their home sites. However, the earliest maps available for Dover – 1852 and 1858 – do not show a structure at that location. A copy of an 1860 tax map does show an “H” in the approximate location of the subject house and the owner of a 3 & 80/100 acre property listed as “L.G.P.”.

Our understanding of the source of these dates is often just what was given verbally by the owner of the property at the time of the inspection for the tax assessment. The property had sold between the creation of the two building cards which explains the different dates for the year of construction on each of the cards. The 1950s/1960s building card includes a photograph confirming that we are talking about the same structure.

The land under the subject house was once part of a 100-acre parcel owned by Sylvanus Smith along the north side of Center Ridge Road east of Dover Center Road. He sold over three acres on the corner with a barn to Lowel L. Adams in the fall of 1832. This may have included the land which is now under the subject house. Lowel Adams may have been an agent for or owner of the first industrial business in Dover.

“A History and Civics of Dover Township” by Hadsell and Rutherford states that between 1830 and 1835 the Dover Blast Furnace was built (near this corner). It burned down in 1844. Its location is still shown on an 1852 map as the “iron furnace” and is depicted as north of the future location of the subject house.

The former location of the blast furnace is evident by what looks like chunks of obsidian on the ground. These are either the results of the final destruction of the blast furnace by fire or are the impurities that were burned off the bog iron as it was melted to make pig iron which was then delivered to the Cleveland flats for further processing. Bog iron was created by a geologic process along former beach ridges and found in low spots on either side of Center Ridge Road.

All of this early activity near the subject house has made it difficult to sort out its ownership and history but it is clear that unless it was moved from another location, it was not built until after 1858 and before 1874.