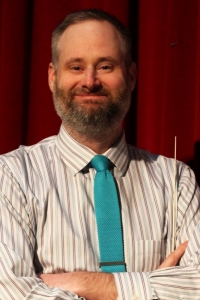 Bay Village Schools Band Director Darren Allen has been selected as one of SBO+ (School Band Orchestra) Magazine's 23rd Annual "50 Directors Who Make a Difference.” Allen was nominated and recognized for his work in making a difference every day for Bay Village Schools students.

Allen is one of only 50 music directors nationwide – and the only one in Ohio – to receive this distinction. He said he is humbled to represent the state of Ohio, especially "when there are so many great music educators in the state."

He has been with the Bay Village City School District for about 18 years, and travels between the middle and high schools. Darren also directs the Cleveland Youth Wind Symphony, in which many Bay High and Westshore students participate.

Karen Misciagna is the director of communications for Bay Village Schools.