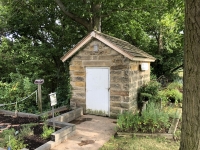 This is the first in a series of articles to be published as a walking tour of Lake Road by the Bay Village Historical Society in 2025.

This small, shake-roof structure is currently located just south of Rose Hill at 27715 Lake Road and is currently utilized by the Herb Guild. It was probably moved from 492 Bradley Road in 1973 when the c. 1872 Italianate Alfred Wolf home was torn down.

The Wolf home had been used as a city senior center until it was replaced by Bay Lodge.

“Bay Village: A Way of Life” states: “The old stone smoke house standing behind the [Wolf] homestead house was used as a jail prior to Horace’s [Wolf] becoming mayor. It was used to lock up prisoners until the Marshal could take them into the county jail.”

A. Horace Wolf served as the second mayor of Bay Village, from 1910 to 1915. He had inherited the property at 492 Bradley Road after his father, Alfred, was robbed and murdered in 1896. While this utilitarian structure may predate 1872 it is highly unlikely that it was built in 1810 when the first settlers in Dover Township arrived.

William R. Krause, AICP, retired as the Assistant Planning Director of the City of Westlake in 2020 after over 30 years with the city. He also served on the Bay Village Planning Commission for 5 years. He was a trustee for the Bay Village Historical Society from 2020 to 2021 and a former board member of the Westlake Historical Society. He was chair of their Lilly Weston Committee and was a member of the Reuben Osborn Learning Center Steering Committee. He is currently a Trustee of the Western Reserve Architectural Historians and the Gates Mills Historical Society. He has been married to Debra for 41 years and is the father of three grown children, grandfather of six and co-owner of a Yellow Lab named Sadie.